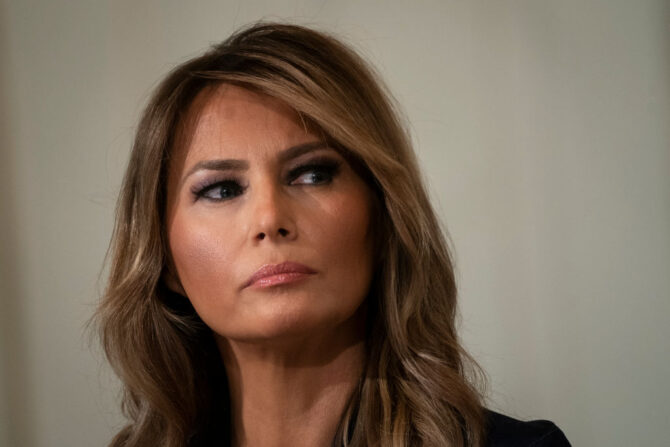 Team Trump will not shut up about FBI agents allegedly ransacking Melania Trump‘s closet during last week’s search of Mar-a-Lago.

In a Truth Social post, Trump accused agents of tearing apart his wife’s wardrobe, writing: “….Just learned that agents went through the First Lady’s closets and rummaged through her clothing and personal items. Surprisingly, left area in a relative mess. Wow!”

Keep in mind, this is just Trump (and right wingnuts) making accusations without offering any evidence to support the claim.

Related: Melania’s closet searched by FBI during Mar-a-Lago raid… What was she hiding in there???

During an appearance on Newsmax this week, Trump’s attorney, Christina Bobb, continued to push the suspicious closet-ransacking narrative.

Bobb said that she “wasn’t allowed to observe what they were doing or see really any part of the raid” when the agents went into the ex-FLOTUS’s closet.

“They told me I have no legal standing to be there,” Bobb griped. “Those were the words they gave to me.”

“We argued over whether that was true or not, and I explained to them … it’s better for you to allow me to observe because then I can’t say, ‘They kept me out and wouldn’t let me observe.’”

“I don’t think anybody just takes the word of the FBI anymore,” Bobb added. “But they seem to be OK with that risk.”

Though it’s not immediately clear if any of Melania Trump’s belongings were among the items seized, any clothing worn for official state events should be turned over to the National Archives after Trump’s term.

“For official events of public or historic significance, such as a state visit, the first lady’s clothes may be given as a gift by a designer and accepted on behalf of the US government,” Joanna Rosholm, press secretary to the former first lady Michelle Obama, explained in a 2014 interview with the Associated Press. “They are then stored by the National Archives.”

Honestly, Melania’s closet isn’t the story here, even though Team Trump would like it to be. They’re just using it as a distraction from the real story, which are those 20 boxes of allegedly highly classified documents that were being illegally stored in a padlocked room in the ex-president’s basement.

On Thursday, Judge Bruce Reinhart, the Florida magistrate judge overseeing the case, OK’d the potential release of a redacted version of the affidavit used by the Justice Department to justify the search.

The DOJ had argued to keep the document under seal. Reinhart plans to hear more from the department next week about how much investigators want to redact from the affidavit before its potential public release.

Meanwhile, Trump’s Team says they have surveillance footage of the FBI search and they’re thinking about sharing it with the media. Eric Trump told Fox News on Monday that they will “absolutely” release the footage “at the right time,” though he didn’t indicate when that time might be.

Hannity: You still have the surveillance tape, is that correct? Are you allowed to share that with the country?
Eric Trump: Absolutely. At the right time. pic.twitter.com/5SwBKPqDVx

We’re guessing we’ll see those tapes around the same time we see Donald Trump’s tax returns (which, BTW, are still under audit) or his health care plan (which, we’re told, he’s still working on). Either that or during his impending criminal trial.

Related: Trump is freaking the F out after concluding “Mar-a-Lago mole” is likely a family member