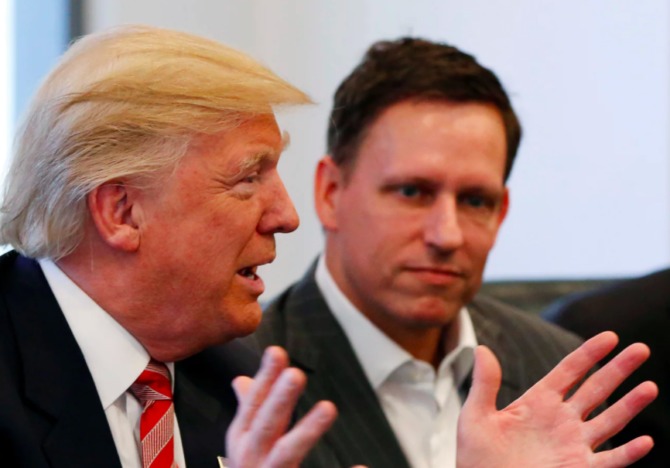 Peter Thiel has had a busy few months.

At his fiftieth birthday celebration in Vienna, the Facebook billionaire married his boyfriend and surprised friends (some of whom arrived in Thiel’s personal jet) with a guest appearance by none other than Seal. Congrats to Mr. Thiel, who just broke the the little hearts of many a young gay conservative.

His company put a chunk of change into Bitcoin, causing the price of the crypto-currency to jump.

He invested more than a million big ones in queer tech start-up Yass, a professional and social networking app, a sign of support for a business owned and operated by his own.

But the biggest news by far is that Thiel is apparently looking to launch a new media company, one that promises to give Fox News and Breitbart a run for their money. Thiel is reported to be in talks with the deep-pocketed Mercer family about starting television network that would compete Fox News from the right (if such a thing can be imagined).

The participation of the Mercers is noteworthy because they cut their financial ties with Milo Yiannopoulos and threw Steve Bannon under the bus after Bannon was quoted eviscerating Trump’s family in the new book Fire and Fury. Having been burned by two loose cannons, the Mercers, whose immense wealth make Thiel look like a pauper, may look upon Thiel as relatively sane.

Related: Is this the end of Peter Thiel and Donald Trump’s beautiful billionaire bromance?

Thiel seems to have started kicking this idea around with the propaganda master himself: Roger Ailes, the man who made Fox News the media arm of the Republican party. After Ailes was ousted from Fox due to harassment allegations, he and Thiel got together to discuss the idea of a new media outlet. Ailes’ death (but not the multiple allegations) cut the conversations short.

The billionaire libertarian is well positioned to be a right-wing media mogul despite his disdain for the mainstream media and liberal blogosphere. Thiel underwrote the legal bills for Hulk Hogan’s suit against Gawker, which drove the site out of business. Last month, Thiel was trying to destroy every trace of the site by pushing to buy its archives, which include the article that outed him. Even after the investment in killing Gawker, the entirely laudatory post outing him is still live.

More troublesome, though, is how enmeshed Thiel is with Trump. The lawyer Thiel paid upwards of 10 million dollars to eradicate Gawker is the same lawyer that Trump is using to send cease-and-desist letters related to the publication of Fire and Fury, an extraordinary attack on press freedom.

Of course, in the right-wing media world, Thiel’s willingness to help the president dismantle the First Amendment is a feature, not a bug. Setting up a reliable propaganda arm indifferent to the standards of reporting would make Thiel a darling in Trumpworld.

Of course we’d love it if Thiel was angling to create a fact-checked, reality-based libertarian alternative to Fox and Breitbart. There is basically no media vehicle for the “never Trumpers” (not to mention pro-equality voices), except perhaps on the opinion pages of Jeff Bezos’ Washington Post. It was Bezos, after all, who accurately called Thiel a “contrarian.” If he could apply those brilliant contrarian insights to the American right and its reactionary preoccupations with race, gender and sexual orientation it would be a tremendous public service and perhaps even draw a large audience lacking thought leadership these days. Then maybe we could get back to talking about the economy and foreign affairs.

But we suspect that’s not what’s on Thiel’s mind. Instead, Thiel may be playing a long game here. He has to know that Trump’s presidency is doomed. He cast his lot with Trump as the best option to promote his weird libertarian ideas but has begun to distance himself from the predictably failed prez. He needs a platform for those beliefs after the Trump presidency is mercifully dead.

What better platform than a media outlet?

After all, if you can get so many people to buy Donald Trump, how hard can it be to convince them, as Thiel believes, that democracy doesn’t work and needs to be destroyed?