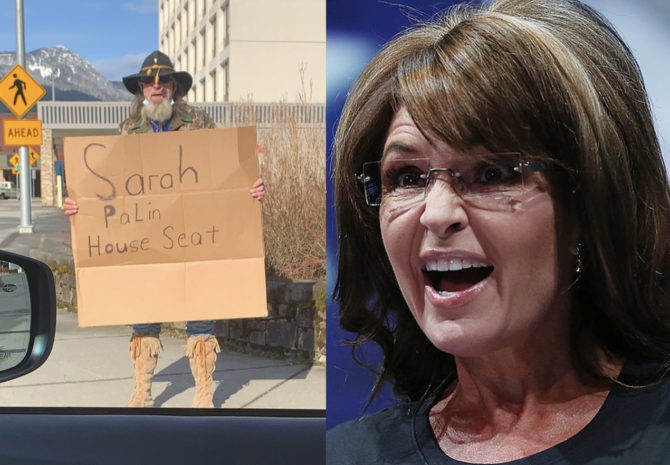 Sarah Palin surprised everyone on April Fool’s Day when she announced she was running to fill the at-large Alaska House seat left by the late Rep. Don Young. And for the past week, she’s been busy campaigning.

Yesterday, the former vice presidential candidate/Masked Singer contestant was cruising through downtown Juneau when she apparently spotted a local man with a cardboard sign that read “Sarah PaLin House Seat”.

“Right on! Thanks for the support in Juneau today. Love the sign! Help us crank out more signs across Alaska,” she tweeted, along with the photo of the guy.

Right on! Thanks for the support in Juneau today. Love the sign! Help us crank out more signs across Alaska at https://t.co/CrlfiG8MJn ?? pic.twitter.com/QyhllDPC0A

Palin immediately won Donald Trump‘s endorsement after announcing her political comeback last week, but she has struggled to win any favor with other important Republicans, mainly Sen. Lisa Murkowski.

Related: Sarah Palin, who’s had the same haircut for 20 years, accuses Obama of being “so still 2008”

When asked about Palin’s candidacy by CNN, Alaska’s senior senator said: “We’ve got 50 names that Alaskans will have the opportunity to choose from. A lot of really good qualified individuals that nobody else is talking about back here. Back home, they are. So this is your own kind of bubble. I’m just telling you: You are not in Alaska’s bubble, because Alaskans are talking about the others.”

LMFAO. Is that your team?

Did you give him some change to hold that sign for you, Sarah?

Can you see the support signs in Russia from there?

Oh, it’s the local guy that wears the crudely stitched together animal pelt (can’t even tell what animal, looks suspiciously domestic) and threatens strangers with a knife!

So, you’ve got the homeless vote locked up?

Did you give him a dollar or no?

😬 This is the wierdest political flex I may have ever seen. It is 1 guy with a homemade sign

While you’re here, check out the trailer for the 2012 HBO film Game Change starring Julianne Moore as Palin…