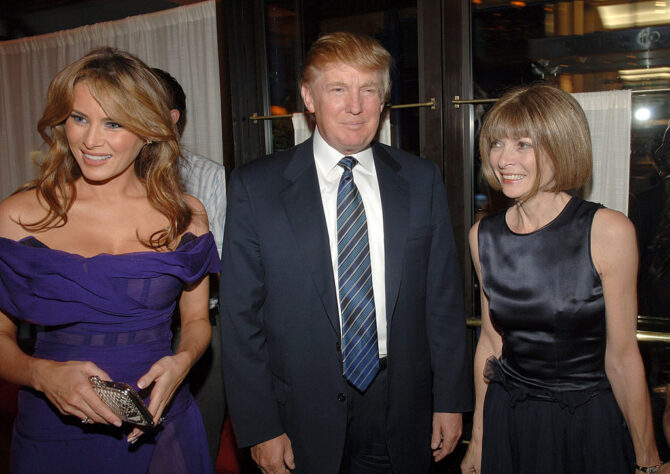 A new biography claims Mrs. Trump was so miffed that Anna Wintour didn’t personally reach out to her before coming to visit Donald Trump after his 2016 presidential election victory that she refused to meet with her.

In “Anna: The Biography,” out this week, fashion reporter Amy Odell writes that the ex-first lady was “so offended” Wintour didn’t contact her directly that she “didn’t even say hello” when Wintour stopped by Trump Tower to congratulate the president-elect.

Odell spoke to Melania’s former BFF, Stephanie Winston Wolkoff, who explained that Wintour, who backed Hillary Clinton in 2016, “begrudgingly reached out” to long-term acquaintance Ivanka Trump to arrange a meeting with the Trumps after the election.

But apparently, Melania, once an aspiring model, had considered Wintour a friend, and so she was offended when the fashion editor didn’t contact her directly.

“Melania didn’t understand that she had been invited to Anna’s events not because she was a friend, but simply because she had appeared on the February 2005 cover of Vogue,” Odell writes.

But the petty drama didn’t end there.

According to Odell, Wintour’s team “tried twice, once before Trump’s inauguration and once after, to photograph Melania for Vogue. But in part since they wouldn’t guarantee a cover, Melania wouldn’t do it.”

In her own book, “Melania and Me: The Rise and Fall of My Friendship with the First Lady,” released in September 2020, Wolkoff told a similar story, saying that when Melania wasn’t offered a Vogue cover, she said: “I don’t give a f*ck about Vogue or any other magazine. They would never put me on the cover. All these people are so mad.”

Wolkoff added that Melania said the magazine’s editors were jealous that she still looked good despite many designers refusing to dress her.

Melania’s predecessor, Michelle Obama, graced the cover of Vogue three times during her tenure as FLOTUS. So far, current first lady, Dr. Jill Biden, has appeared on the cover once.