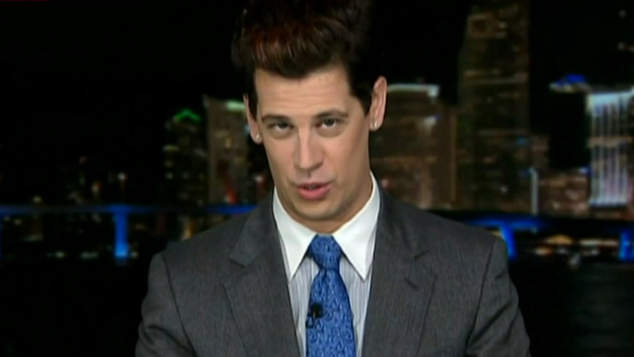 A popular televangelist has singled out right-wing gasbag and newly proclaimed “ex-gay” Milo Yiannopoulos as the cause of an outbreak of COVID-19 in her church. Yes, really.

Lauren Witzke, the substitute host of the fringe Christian show TruNews, pointed her finger at Yiannopoulos following an outbreak of the virus within the studio which also infected senior Pastor Rick Wiles, the usual host. Wiles remains hospitalized due to complications from the virus.

Related: Right-wing roach Milo Yiannopoulus crawls out from obscurity to call for violence against the GOP

Witzke, for her part, blamed Wiles’ recent interaction with Yiannopoulos for his infection. The alt-right troll had recently appeared on TruNews to promote his newfound heterosexual identity. Yiannopoulos rose to fame in the lead-up to the 2016 US Presidential election as a defender of Donald Trump and white supremacy. His career collapsed not long after following comments in which he appeared to endorse pedophilia. He’s made an attempt to reboot his career by proclaiming his recent “change” in sexual orientation and endorsement of conversion therapy.

Lauren Witzke says the wave of COVID-19 that swept through TruNews was a demonic attack on the network for having Milo Yiannopoulos on the program after "Satan's favorite sodomite" became "ex-gay" and a Christian. pic.twitter.com/3tewgOkPSH

“I don’t think it’s any coincidence that the TruNews crew all got deathly ill – got very sick – right after they brought Milo onto their show and he shared his testimony,” Witzke said on the show. “You have to remember that this is a spiritual battle as well and our enemy retaliates. This is retaliation. We constantly, you know, battle demonic spirits.”

“It was no coincidence that Rick and his crew are in the situation they’re in because they stood for Christ and had, you know, the spine to bring Milo on and share his platform and his testimony,” she went on. “Milo is somebody who belonged to the darkness. He was Satan’s favorite sodomite, wasn’t he? And we took him back, Christ took him back.”

This isn’t the first time a host of TruNews has made incendiary or ridiculous claims about COVID-19. The currently-hospitalized Rick Wiles had previously blamed LGBTQ people, China and Jews for the virus at one point or another, calling it God’s punishment. He has also condemned vaccines as a way of curbing infections.