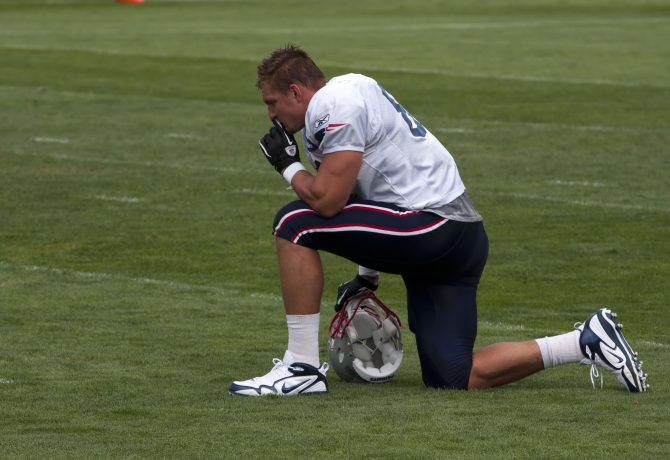 It’s about time male athletes are able to publicly admire one another’s well-trained physical vessels without the cloud of homophobia rolling in to rain down fear and idiocy all over the locker room floor.

Former New England Patriots quarterback Tom Brady (he just signed a new 2-year contract with the Tampa Bay Buccaneers worth a cool $60 million) sat down for a recent Zoom interview with Howard Stern, and among the topics discussed was how comfortable teammates get with seeing each other in the buff. Makes sense.

“You get used to it,” he said, “I mean every guy’s penis looks the exact same… A man’s a man.” We’re not sure we’d totally agree, but we understand the sentiment.

But then Brady took it several steps further, pointing out his special admiration for one player in particular — Rob Gronkowski.

Asked specifically about Gronkowski’s endowment (oh Haward), Brady said: “Yes he does, it’s amazing. It’s exactly what you would expect it to be.”

“That guy is like a Greek god, his body, that guy is jacked up,” Brady continued.

Related: Patriots’ Rob Gronkowski Would Be “Cool” With Gay Teammate

Then he shared this ripe-for-fantasy memory:

“It’s funny, because I think they still let reporters into the locker room… Gronk would get naked, and literally throw this towel over his shoulder, and just walk through the locker room with all the reporters, and I would just laugh, because Gronk, he doesn’t give a sh*t, he’d just strut through.”

Now might be a good time to revisit this video of a guy licking sushi off of Gronk’s body.