The Stream: The Trials of Gabriel Fernandez

The case of 8-year-old Gabriel Fernandez, a child murdered by his mother and step father because they suspected he was gay, captured the attention of the world, and broke all our hearts here at Queerty. Now Netflix launches this new documentary series which retells the case in new detail, and aims to find an explanation behind the horror. Even more upsetting: concerned teachers & school administrators had notified social services about the abuse Gabriel suffered and did nothing. Four social workers later faced charges of falsifying their records for their failure to remove the child from his home. So how does all this happen? Who was the real Gabriel, the child who had to endure such pain? The Trials of Gabriel Fernandez aims to address those questions and more, and issues a new call to protect LGBTQ children.

The Catch: Straight Up

Writer/director/star James Sweeney charmed us with this ironic romantic comedy about a gay man totally afraid of gay sex. His solution? Date a woman…and never have sex with her either. Straight Up addresses themes of mental illness, anxiety and the decided lack of gay sex education in contemporary society. Literate and witty, it also has some very big laughs, sharp dialogue and frank observations about life as an artist. Beneath the surface, however, Straight Up offers a meditation on loneliness, and how a need for affection far transcends a need for sex. At long last, the film comes to theatres, bringing its wry observations to a mass audience.

One of the better documentaries to come out of 2019, Scream, Queen follows the crazy story of actor Mark Patton, the gay actor who played the lead in the Gayest Horror Movie Ever, A Nightmare on Elm Street 2: Freddy’s Revenge. For the first time, Patton goes on camera to recount his rise as a leading actor on stage and screen, his secret relationships in homophobic Hollywood, and how appearing in Nightmare 2 destroyed his career. A candid Patton also recounts his subsequent battles with drugs, alcohol and HIV before turning his life around and returning to show business. Shocking, infuriating and absorbing as Hell, Scream, Queen tells a new Hollywood cautionary tale, and vindicates Patton, as well as A Nightmare on Elm Street 2. It’s about damn time.

In case you’ve still not experienced the joy of Rocketman, the Taron Egerton-led Elton John biopic, now would be a good time: it just picked up the Queerty award for Best POPcorn film. The movie implements John’s iconic music in full-on classic Hollywood style musical numbers as commentary on the singer’s tumultuous life. Egerton gives a fine performance (he sings too), though Jamie Bell, as John’s longtime lyricist Bernie Taupin, steals the movie. The real star, though, is John’s fantastic music (including the new song “Love Me Again” which just picked up an Oscar). Watch it and try not to sing along.

Anyone with a taste for a real drama with a gay character at its center, look no further than this year’s Best Indie Film Queerty winner, Pain & Glory. Antonio Banderas gives his best performance to date as Salvador, a filmmaker struggling with a nasty case of writer’s block. Writer/director Pedro Almodovar doesn’t hesitate to inject obvious details from his own life and career into the story, so much so that it’s hard not to see Pain & Glory as a personal confession. That makes the film hard to watch at times, though it also makes it all the more impactful. Banderas should have won the Oscar this year. As such, we feel a need to recommend it again here.

And speaking of harrowing gay stories, Trixie Mattel: Moving Parts took us way off guard last year for its frank, behind-the-scenes showbiz drama. No wonder it took home the Queerty Award for Best Documentary. The film follows the Drag Race alum on her comedy/music tour, while dealing with the woes of performing in heels, familial dysfunction, and close friend Katya’s mental breakdown. Far more than a standard showbiz doc, Moving Parts presents its title figure emotionally naked and vulnerable. It’s a must for Drag Race fans, and elevates Trixie from standard drag performer status to the level of a multifaceted artist. 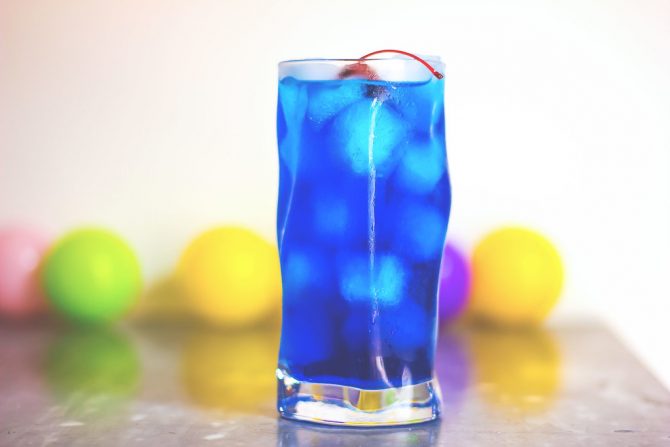 In honor of Scream, Queen finally getting a proper release, we feel compelled to try out this blue and fruity cocktail, perfect for sipping when you want to scream, or when needing to calm down after screaming. Given this week’s entries, we have a feeling you’ll do one or the other.

Mix over ice and serve.