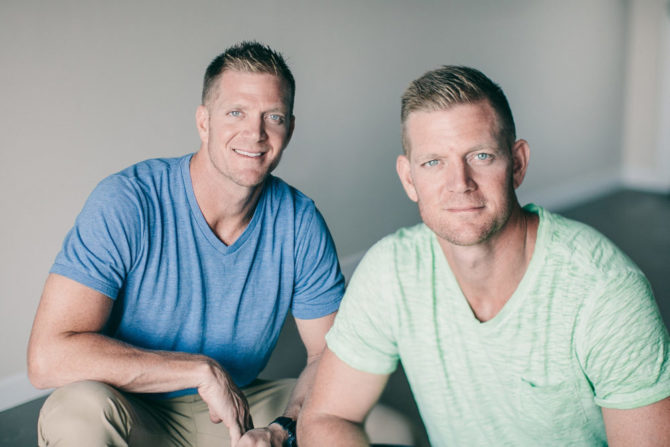 “Flip It Forward” was supposed to premiere on HGTV in the fall of 2014. But after Right Wing Watch ran a story about David Benham’s antigay advocacy work, which included holding a “prayer rally” in 2012 to “stop homosexuality and its agenda that is attacking the nation,” the network pulled the plug.

HGTV has decided not to move forward with the Benham Brothers' series.

And just like that, the extreme right had two new golden boys to rally around.

The identical twins, who are both graduates of Jerry Falwell’s Liberty University, quickly became the poster children for liberal intolerance, religious persecution, and censorship.

Shortly after HGTV announced it was cutting ties with the bigoted brothers, the pair put out a statement that said:

We were saddened to hear HGTV’s decision. With all of the grotesque things that can be seen and heard on television today you would think there would be room for two twin brothers who are faithful to our families, committed to biblical principles, and dedicated professionals. If our faith costs us a television show then so be it.

Then they hit the media circuit, doing interviews with everyone from CNN to the Hollywood Reporter, and insisting they didn’t hate LGBTQ people at all. In fact, they loved them! They just thought they were sick perverts who were damned to hell unless they gave up their wicked ways and repented for their disgusting sinful lifestyles.

So what happened after that? Well, the twinsies successfully managed to parlay their 15 minutes of infamy into careers as professional bigots. At least, for a while.

In addition to regularly booking appearances on major conservative media outlets like Fox News and the Trinity Broadcasting Network, as well as giving speeches at Christian hate groups like the Family Research Council and the Family Heritage Alliance, they published four books between 2015 and 2019, most of which are just rehashings of their homophobic blog posts, and they launched a vlog called “Living Among Lions,” named after their 2016 book of the same title.

Here’s an episode from earlier this year where they spend the first 20 minutes bashing drag performers. Viewer discretion advised!

But as time passed and people forgot about the whole HGTV debacle, their influence waned. (Though their obsession with LGBTQ people has not.)

The guys have gone from appearing on mainstream conservative media outlets to appearing on obscure right-wing podcasts like this and public access television shows hosted by religious zealots like this.

Related: After Orlando, Benham Brothers Love Gays So Much They Want To Help Them Turn Straight With Jesus

They no longer make headlines (except in April 2020 when David was arrested for violating stay-at-home orders during lockdown when he refused to stop blocking the entrance of an abortion clinic in Charlotte, North Carolina), and with just 8,000 followers on Twitter and 16,000 followers on Instagram, they hardly count as social media “influencers” anymore.

The brothers’ weekly vlog posts usually only receive between 500-700 views, and their tweets get virtually no engagement, like this one from August 7 offering free copies of their latest self-published book that only got 12 likes, 5 retweets, and 1 comment (from a troll).

Our business book is out! And we’re giving it away free! This book details our story and the system we used to build our business on 12 key steps that got us to “SeeYaPreneur” status by the age of 33. Click https://t.co/JpEXJB9Xk3 to grab your free copy! ???? pic.twitter.com/e33meW3VzU

Most recently, David’s self-published the book, “Beauty in Battle,” co-written with his wife, Tori, didn’t even crack the top 500,000 on Amazon’s bestseller list. Released just one month ago, it’s currently #651,881 in Books.

We think it’s safe to say that these guys’ 15 minutes ran out a while ago and thank god for that. They’ve mostly been forgotten. Except, of course, by the internet, which remembers forever. That’s right, folx. Like their love for Jesus Christ, David and Jason Benham’s deep and unrelenting obsession with gay people and gay sex will live on for eternity.