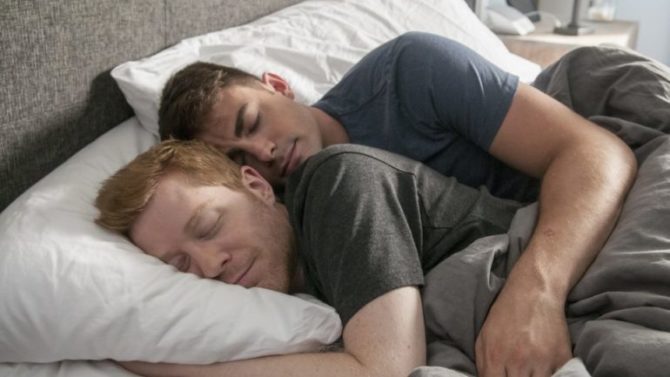 Once upon a time, audiences wishing for a little gayness in their movies had to look to the art house cinema or maybe the back shelves of Blockbuster. These days, queer cinema has migrated and proliferated—along with any other indie genre piece—to streaming services like Netflix or Amazon. That yields good news for audiences wanting something fresh and new to throw on the screen.

That’s where we come in. The films profiled here all flew under the radar for initial release before finding life on streaming platforms. They also all received positive reviews from critics and audiences alike. Review aggregator RottenTomatoes also has recommendations based on combined scores from various critics all over the world. Not that the scores mean much–the site often ignores smaller, indie fare. That means the site omits a lot of fine movies that go straight to streaming.

But that’s why we’re here, remember? The films we profile here combine some of the best-rated films on RottenTomatoes with some of the best films the site has ignored. Together, they represent a variety of subjects and voices of the queer experience.

So, grab the popcorn and get ready for some damn good movies, and plenty good ‘ol fashioned gayness.

Two childhood friend reunite as adults, and long-buried feelings begin to surface. If Esteros uses a familiar premise, that’s ok. This South American film examines coming out through a South American lens, drawing some interesting contrasts. Lush visuals of the Argentine countryside add to the mystery and allure.

Anthony Mackie (Falcon in the Marvel Cinematic Universe) gives one of his earliest breakout performances in this historical drama about the Harlem Renaissance. Tracing the stories of notable gay authors like Langston Hughes in the 1920s, the film examines the topics of race and sexuality in a historical context.

This Brazilian coming-of-age drama earned strong notices when it debuted in 2014 for its portrayal of a teen’s coming out, a youthful love triangle, and a blind protagonist. Much like the films of Pedro Almodovar, it provides a glimpse into gay life and its struggles in a foreign culture.

The Way He Looks streams on Netflix, Amazon, YouTube, Vudu and iTunes.

Director Stephen Cone described this teen dramedy as a “love letter to queerness.” Meet Cyd, the precocious, complicated lesbian protagonist on the edge of womanhood and coming out. It’s also a cross-generational story of two women, one young, the other middle-aged, as they both blossom into themselves. Far from a typical coming out story, Princess Cyd provides some very original characters and some very big laughs.

Related: “The Advocate” knew about Kevin Spacey’s encounter with Anthony Rapp, but kept quiet. Here’s why.

Oh, you knew it was coming. Gus Van Sant’s biopic of the LGBT Civil Rights leader features an Oscar-winning turn by Sean Penn in the title role. Given Penn’s filmography, that it also ranks as one of his best performances also speaks volumes. The film also owes a lot to the Oscar-winning script by Dustin Lance Black which recreates San Francisco in the 1970s, and times desperate as they were exciting.

That Anthony Rapp has only now found mainstream stardom on Star Trek: Discovery is our loss. An outspoken activist and role model, he also owns a deep well of dramatic talent. He finally had a film role to show it off with Do You Take This Man, a 2016 movie focusing on the drama surrounding an upcoming gay wedding. Though overlooked on release, the film finally has scored a following thanks to streaming services, and to fine performances from castmembers Rapp, Alyson Hannigan, Thomas Dekker and Mackenzie Astin.

Do You Take This Man streams on Amazon, YouTube, Vudu, and iTunes.

Matthew McConaughey and Jared Leto both scored Oscar gold for this tale of an HIV+ straight man and his transgender friend who start a black market pharmacy for experimental drugs. Flawed and controversial for its portrayal of a transgender woman, Dallas Buyer’s Club should nonetheless hold audience’s attention thanks to the two great performances by Leto and McConaughey.

The debut feature from Dee Rees, director of Mudbound, Pariah follows the story of a young African-American woman struggling with her racial and sexual identity. Though an undeniably personal story, Pariah will no doubt rouse bittersweet memories of coming out for many viewers, evoking a tender and delicate time of discovery.

Before out hottie Jussie Smollet landed his breakout on Empire, he starred in this dramedy about five friends hanging out at New York City Pride. With a cast that also includes Wilson Cruz, Darryl Stephens, and Jeffery Bowyer-Chapman, The Skinny has a great mix of scandal and seriousness.

The Skinny streams on Amazon.

Maybe those of us on the hunt for silver foxes have some issues. So argues Daddy anyway, an indie drama featuring out-actor Gerald McCullouch, who also directs. Daddy raises some compelling issues about how marriage equality has affected a generation that never believed it possible. It also examines the May-December dating phenomenon (in an interracial relationship, no less) and the deeper issues that can make such a relationship fail, or succeed.