Badazz made the suggestion on Twitter October 23 as part of a longer rant against Lil Nas X. “STOP TROLLING ME F*GGOT LOL!!,” the tweet read. “U A WHOLE BITCH PLAYING WITH A GANGSTA SMH U KEEP SUCKING D*CK N GETTING F*CKED IN YOUR *SS N PEACE N #uhatehourself. I WOULD TOO IF I WAS U LIL NASx. IF YOU #commitsuicide YOU WOULD DO THIS WORLD A HUGE FAVOR NOBODY WANTS U HERE.” 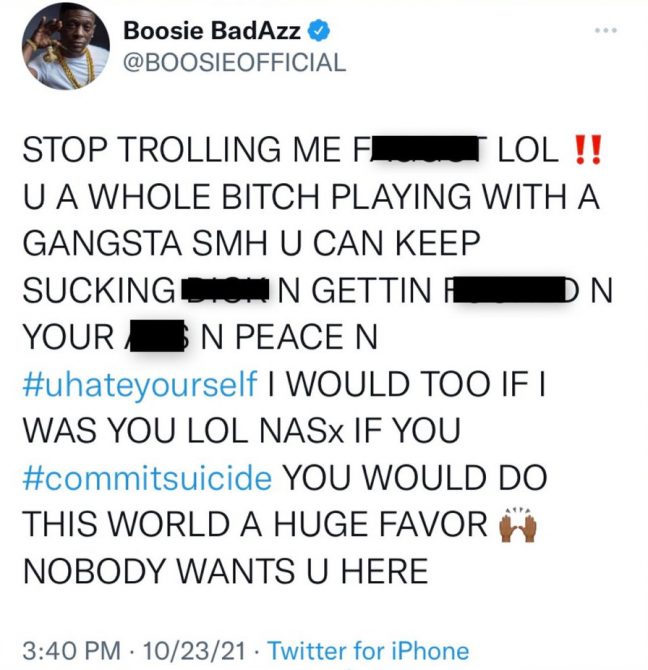 Twitter later responded by taking down the comment, as it violates the company’s standards on hate speech and bullying.

Badazz made the remarks following Lil Nas X joking on Instagram that the two were collaborating on a new song. They also come after Lil Nas X publicly discussed his own struggle with depression and suicidal ideation in a chat on TikTok. He further revealed that he suffered homelessness and domestic abuse after coming out as gay.

Related: Boosie Badazz outraged after being banned from gym for filming transphobic rant in weight room

Boosie Badazz, meanwhile, continues his attack on Lil Nas X which began this summer. Badazz took to Instagram in July to rant about his disgust with queer people and Lil Nas X specifically.

“Everybody not with their nephew sucking d*ck. Everybody not with that shit. You just can’t just put that shit on everybody and expect it to be cool,” Badazz said. “Nas X say he wanna perform naked onstage for charity. You don’t f*ck with him like you f*ck with DaBaby. You know, be even-sided, man, be even-sided. You don’t feel that disrespect? Going [to] dance naked? You don’t think that’s disrespect in front of boys who tryna be straight? It’s totally disrespect.”

“If I’m at an awards [show] and he go up there naked, I’ma drag his ass offstage and beat his *ss,” Badazz continued. “You let a n*gga dance naked in front your children, you a motherfu*ckin’ crazy motherf*cker—or you like d*ck too.”

In the same comments, Badazz further suggested that “In 10 years, it ain’t gonna be normal for a kid to be straight.” His remarks invited wide criticism at the time for their overt homophobia.