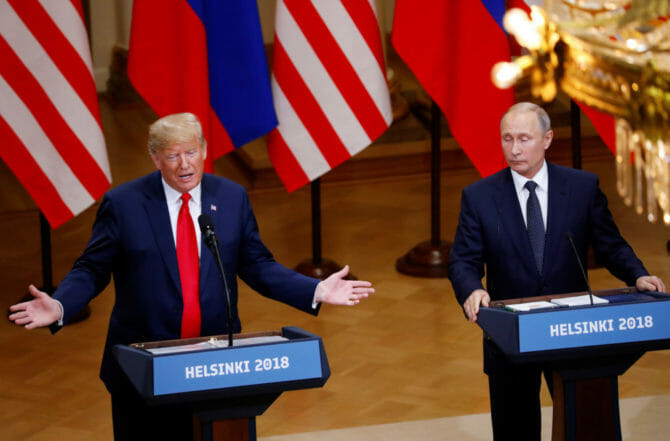 Now that Donald Trump has confirmed that Vladimir Putin is his BFF, it’s worth a reminder of just what normalizing Russia’s bad behavior means. In the case of LGBTQ rights, it means that Trump has sanctified the violence and oppression that Putin has made a hallmark of his presidency.

Just how bad is it? With his cowardly and traitorous performance at Monday’s press conference, Trump essentially gave a green light to Putin to do whatever he wants to do and will likely ramp up his attacks on the LGBTQ community.

Based on what Putin has done in the past, that’s going to be pretty ugly. Here’s a list of some of the most egregious and vicious attacks on LGBTQ people that characterize Putin’s Russia.

Putin has made sure that violent attacks against gay men in Russia are not only never prosecuted but affirmatively condoned. Murders of gay men are routine, and just as routinely ignored by authorities. Kidnappings and beatings by skinheads are commonplace, while police turn a blind eye. While gay men are often the target, trans Russians are also victims. The 2014 Olympics in Sochi turned the media spotlight on Russia’s practices, but nothing has changed since then.

Strictly speaking its own country, Chechnya is in everything but name an extension of Russia. Untold numbers of gay men have been murdered at the hands of vigilantes, with the blessing of Chechnya’s Putin-backed government. Hundreds more have been rounded up and, in a chilling step reminiscent of the Nazi Holocaust, sent to concentration camps where they are tortured and humiliated. In a step that no doubt brought a smile to Putin’s face, the U.S. government has routinely denied visas to men seeking to save their lives by fleeing the country.

One of Putin’s biggest legal successes was the passage of a law banning “gay propaganda in the vicinity of children.” The law has been a handy cudgel against anyone the Putin government deems as pro-LGBTQ. In fact, anything that smacks of being easy on gays is subject to censorship, including kid-friendly movies like Beauty and the Beast and Power Rangers.

Eugene Wojciechowski and Pavel Stotsko were legally married in Denmark and then registered their marriage in Moscow last January. Then the police surrounded their apartment, cutting off their electricity and internet. They and their families received threatening calls. The couple was only able to escape the situation by turning over their passports, meaning that they can no longer leave the country harassing them.

Just because you’re not Russian doesn’t mean you’re safe if you’re a gay visitor. Four Dutch tourists were arrested for working on a documentary about LGBTQ rights in the country. British activist Peter Tatchell was arrested last month in Moscow for holding a sign criticizing Putin for his complicity in Chechnya’s violence. And it’s not just arrests, but physical attacks as well. Two French men attending the World Cup games in Moscow were viciously beaten for being gay.

6. Facilitating the spread of HIV

Russia is seeing exploding numbers of HIV cases, and, backed by religious conservatives, Putin is doing everything in his power to make sure the rates keep rising. The government turned away U.S. dollars to help fight the epidemic and shut down programs that help people with HIV. Even simple education is forbidden. Last May, the government shuttered a website that provided safe sex information to men who have sex with men.

In perhaps Putin’s greatest coup, his intelligence apparatus labored intensively to interfere with the 2016 election to tilt the results in favor of Trump. Besides Trump giving a credible imitation of a useful idiot, Putin hated Hillary Clinton, who once got into a shouting match with his officials on their official homophobia. With his surprise victory, for which Putin deserves some credit, Trump has systematically rolled back LGBTQ rights in the U.S. The consequences haven’t been as dire as they have been for LGBTQ Russians, but the direction is the same.

It’s a case of Trump following the leader–or, in this case, his leader.