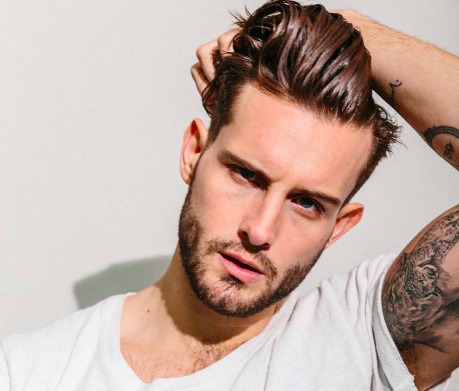 Newlywed Nico Tortorella is proof that looks really can be deceiving. In a new interview with Gay Star News, the 29-year-old actor opens up about his experience as a non-binary “straight passing” cisgender male, as well as the difficulty with which some in the gay community have with accepting him.

“A lot of my audience and the world knows me as a character I play on television who’s a very cis, very straight dude,” Nico says.

“It makes me seem a way that is, quote unquote, ‘normal’ on television that’s approachable and super commercial. I mean, historically, the straight, white man has always been the first person to get a message across.”

Related: PHOTOS: What’s better than taking a bath? Taking one with Nico Tortorella.

The 29-year-old says there’s “absolutely a privilege” that comes with being or simply appearing to be a straight, white, cisgender dude. And he’s the first to admit he enjoys it.

“It’s in the way I conduct myself and hold myself, and even my primary relationship, which is with a biological female and in one way or another [emphasises a sense of] straight-passingness,” he says.

Last month, Nico married his longtime lesbian partner, Bethany Meyers. The couple has been in a polyamorous relationship for the past 11 years.

“In many ways we’re very much gender-queer and don’t believe in the binary at all. But for the rest of the world, yeah, of course there’s a privilege,” he says.

He continues, “With that recognition–and I’m not speaking for other people– there’s a responsibility to use that platform to spread a message that’s much larger than who I am, the relationship I have and what I do.”

“If I can be a conduit for positivity and celebrating marginalized communities and relationships that don’t usually get the microphone, then I’m gonna f*ckin’ do that as loudly as possible.”

And as for his critics, Nico has this to say:

I’ve dated other bisexuals and I’ve dated straight women and gay men. The most flack I get–and not necessarily flack but just confusion of acceptance–is from, specifically, cis gay men that can’t fathom that I can play in the spectrum of both gender and sexuality.

But I think the message of this conversation, the way I use the word ‘fluid’, transcends any gender behavior or gender expression. To really shape-shift and to be the best version of yourself that you can possibly be all the time–that changes who you’re surrounded by, the environment you’re in and where you are in your life. You can’t break something that bends.