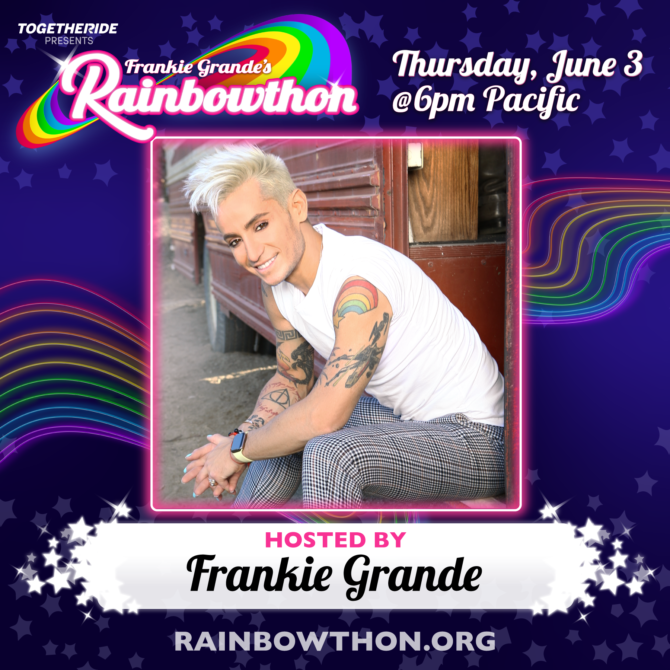 Pride in Los Angeles may not have its festival this year (thanks again, COVID), but thank goodness for Rainbowthon, the live concert to kick off the party from home. This special event, sponsored by the LA Gay & Lesbian Center, will feature special appearances and live performances by Arianna Grande, Alexandra Billings, Shoshana Bean, Alyson Stoner, Laith Ashley, JoJo Siwa, and Jewel. And, of course, count on host Frankie Grande getting into the shenanigans. Best of all, viewers can donate to help the Gay & Lesbian Center, and all the programs for queer people of all ages it serves. It’s a great—and philanthropic—way to open up the pride season.

Queer sci-fi fans already know: few icons tower above the stature of Nichelle Nichols, the classy, ripped-abed, bombshell actress known for portraying Lt. Uhura in Star Trek. Few fans also probably know about her work as NASA spokesperson and the far-reaching effect of her work as a recruiter for the agency. Nichols made it her objective to reach out to women and people of color when she took up the job in 1977, eventually drawing 8,000 African American, Asian and Latino people to the agency. That includes Sally Ride, Mae Jemison, the first African American woman in space, as well as Christa McAuliffe, who died in the Challenger disaster. Featuring extensive interviews with Nichols discussing the influence of Trek, Civil Rights activism and her role in bringing diversity to space, Woman in Motion makes the case that Nichols is more than just an actress or an icon—she’s a real-life, unsung hero.

Queer author Matthew Davison drops his long-anticipated novel this week, an examination of Cancel Culture, #MeToo, gender roles and homophobia. Doubting Thomas follows the story of Thomas, an openly gay teacher at a prestigious elementary school. Thomas finds his life in chaos when a student falsely accuses him of inappropriate touching and struggles to endure the fallout. Call it an update of the Lilian Helman classic The Children’s Hour—one that begs serious questions about gender, race, class and politics, and one smart enough to raise those questions in the first place.

Maybe we’re just stir crazy and gunning for some pride action, but we can’t escape the overwhelming desire to dance a bit. As a matter of accompaniment, singer Brandon Anderson’s new electro-pop dance track “Pixelated Love” just feels about perfect. The song traces a romantic connection over the digital landscape, capturing the yearning for human contact so many of us feel, with or without a pandemic to interfere. As we all rush to dance in the sun once more (fully vaxxed, natch), we recommend playing it at maximum volume…particularly with someone to make out with nearby.

The Sweet: Wrabel’s “Nothing But The Love”

Queer ballad king Wrabel drops his latest track this week, another soulful ode to love and the inspiring power it has on lovers. Wrabel’s pop vocals this time out prove he can belt toe to toe (or even eclipse) with the likes of Sam Smith or Rufus Wainwright (more on him in a sec). Moreover, his simple lyrics capture the aching joy of being in love, and wanting to be a better person for it. Note to the radio gods: Wrabel is ready to conquer the Top 40.

For a smooth, sexy dance-ready jam, make sure not to miss this new collaboration between electronica artists Ampersounds and the always-wonderful Rufus Wainwright. “Technopera” combines synthwave pop with a sexy dance beat that immediately made us want to cut loose. Couple that with the silky bass of Wainwright’s vocals, and we have immediate flashes of a sensual night on the dancefloor. With COVID-19 on the wane, we’re bumping this (along with visiting a sensual dance spot) to the top of our playlist.

The Sip: The Moonwalk 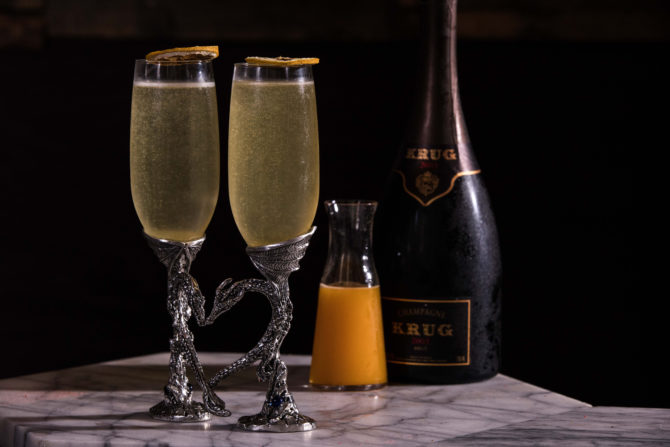 In honor of Nichelle Nichols and her contribution to NASA, we suggest this week’s sip: The Moonwalk. A tart, exotic and bubbly concoction, you’ll have liftoff in no time.