Stepping out on a movie date this Thanksgiving? Netflixin’ while the pie is in the oven? Whatever your entertainment needs this holiday season, we got your back (and hopefully your mind) with Queerty’s special Thanksgiving Edition “Culture Club” column, serving up some of the highlights of new releases, streaming shows, classics worth revisiting, and what to drink while you watch.

The Carving: Knives Out

Director Rian Johnson (Looper, The Last Jedi) returns with this ode to Agatha Christie-style murder mysteries, family dysfunction, and murder. Christopher Plummer plays an aging author who gets bumped off just before disinheriting his nutty family from his will, and Daniel Craig plays a hilarious southern detective on the case. With an enormous cast that includes Chris Evans, Ana de Armas, Jamie Lee Curtis, Don Johnson, Katherine Langford, Michael Shannon and Toni Collette, Knives Out works as a screwball family comedy, and a taut murder mystery. And since we’re pretty sure everybody has at least one family member they’d like to off on Thanksgiving, we recommend Knives Out as a cinema outing. It’s certainly preferable to actual murder.

The Side: Eastsiders Season 4

Just in time to wake you from that Turkey Day coma, the sexy web series-cum-Netflix show returns for a fourth and final season. These new episodes find the hipsters of Silverlake wrestling with issues of commitment and indecision. At exactly what point should a couple get married? Should someone have children to please a spouse? And exactly how much sex is too much sex? On that last question, Eastsiders spends a lot of time. That deep, penetrating exploration, coupled with a great list of guest stars including Tom Lenk, Hailie Sahar, Traci Lords, Jake Choi and Katya, make the season a very charged send-off.

The Stuffing: Home for the Holidays

Lesbian director Jodie Foster made her debut with this ensemble comedy about an unemployed, single woman (Holly Hunter) who returns home to spend Thanksgiving with her nutty family. Stuffed with an impressive cast that includes Robert Downey, Jr. (as Hunter’s gay brother), Anne Bancroft, Charles Durning, Claire Danes and Steve Guttenberg, Home for the Holidays captures the affection and friction between loving family members that so often comes in large helpings on Thanksgiving.

Writer/director Jenna Lorenzo made her feature debut with this screwball comedy about a woman coming out as gay on Thanksgiving. Somehow, despite bringing her girlfriend home, Lauren (Lorenzo) can’t seem to get the message across to her crazy family. The movie treats Lauren’s coming out with a refreshing matter-of-factness, though the real joy comes from an outstanding supporting cast that includes Steve Guttenberg, Brandon Michael Hall, Kevin Pollack, Bruce Dern & Cloris Leachman. The latter pair manages to steal the movie with their hilarious antics.

The “Black” Friday: Orphan Black – The Next Chapter

Anyone wanting something a little disturbing this weekend beyond people camped outside of Target on Thanksgiving Day, give a listen to this official continuation of the popular sci-fi series. The story picks up eight years after the TV series ended, finding the clones fighting to prevent a global disaster. The show began back in September, though we’ve opted to include it now thanks to the presence of queer actor Jordan Gavaris, who lends his voice to a forthcoming episode.

Finally, for a sweet dessert this year, why not stick with a classic. Though not as popular as his Christmas or Halloween offerings, A Charlie Brown Thanksgiving finds its titular, angst-ridden character overrun by his friends who crash his Thanksgiving dinner. They’re led, of course by the ever-lesbianic Peppermint Patty (who’s actually voiced by a male actor this time). It’s classic, Americana fun with some very big laughs…and a few warm & fuzzy sighs too.

The Sip: The Pumpkin Spice Martini 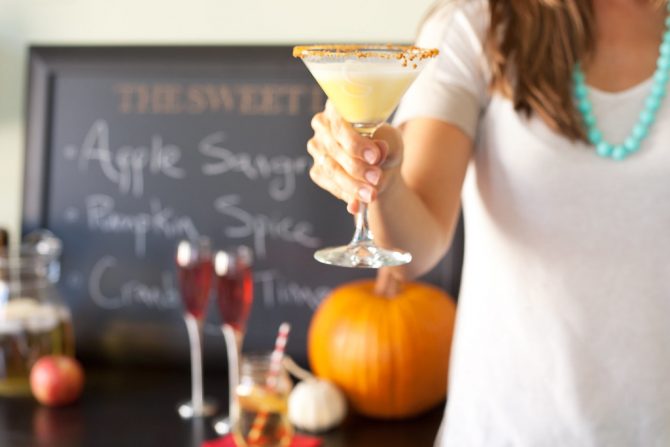 For a sweet accent to this year’s Thanksgiving dinner–or just to make eating with Trump-voting relatives palatable–sip on this potent pumpkin potable.

Mix ingredients in a martini shaker over ice. Shake well. Serve in a martini glass. Optional: add sugar, cinnamon and gram cracker crumbs around the rim.