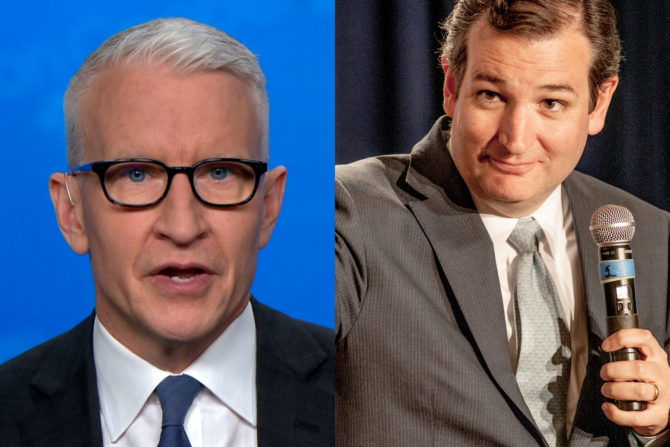 CNN anchor Anderson Cooper bit into Sen. Ted Cruz over the weekend, following the Senator’s remarks criticizing an ad for the US armed forces.

It all started May 20, after Cruz shared a video mash-up of a Russian army recruitment ad intercut with an American one, in which a woman talks about her same-sex moms.

“Holy crap. Perhaps a woke, emasculated military is not the best idea…,” Cruz commented in the video post. The Twitter post attracted immediate blowback, including a commentary from Mr. Cooper.

Cooper opened his criticism of Cruz by noting his trip to Mexico amid a blizzard in Cruz’s home state of Texas which left residents without power and freezing to death.

“When last we caught up with the junior senator from Texas, his constituents were freezing,” Cooper observed. “Some were dying in dark, unheated homes during the state’s worst winter disaster in recent memory. As for the Senator, he high-tailed it to a seaside resort in Cancun lying about why he was leaving and at the same time, blaming his 10 and 12-year-old daughters. Which is kind of amazing.”

“These days,” Coopery continued, “the man whose own colleagues don’t bother even trying to say anything nice about him has found a new way of showing contempt for the people he serves, and the people who serve us all in uniform. He retweeted a TikTok contrasting a muscled Russian man doing military training with a US Army video showing a very American notion: that our troops, in this case, a woman raised by same-sex parents, come from all walks of life. This is a source of strength.”

When the “opportunity presented itself to join…he thought about it and thought better of it,” says @andersconcooper after Sen. Ted Cruz mocked a “woke, emasculated” military.

“When somebody doesn’t serve I don’t know it’s a great idea to be attacking someone who did serve.” pic.twitter.com/cftNOYATXa

Cooper then noted that the video Cruz retweeted has been circulating on anti-American sites for some time, including those promoting fascism and antisemitism. Cooper then lit into Cruz’s attempt at deflection for posting the video.

“Not content to carry water for this country’s enemies,” Cooper continued, “as the angry replies came in, Senator Cruz then decided to go for the old anti-gay slur. Quoting from a subsequent tweet, ‘We have the greatest military on Earth. But Dem politicians and woke media are trying to turn them into pansies.’ A word I’m quite sure he’s familiar with, from his youth.”

Related: Ted Cruz bombs at CPAC with jokes about men french kissing and his trip to Cancun

Cooper added that Cruz always avoided serving in the military himself. He then showed an archival interview of Cruz talking about his decision to not join the military, and how he regrets not doing so.

“I bet he does wish he served because it’d be better for him politically now,” Cooper observed, “but he spent a lot of time imagining himself in a uniform, but probably not to actually serve. He was clearly too busy in college pursuing other manly, un-pansy-like pursuits.” Cooper then recalled a story of Cruz’s college dormmates seeing him wander the halls in a paisley bathrobe.

The moral of this story: Ted Cruz should just shut up. The Senator has a long history of homophobia, including remarks on his controversial Cancun trip. He has also referred to the Supreme Court decision legalizing same-sex marriage as one of the darkest moments in American history. Recently, former House Speaker John Boehner labeled Cruz a “jack*ss” and also claimed that Cruz is openly despised by members of his own party.