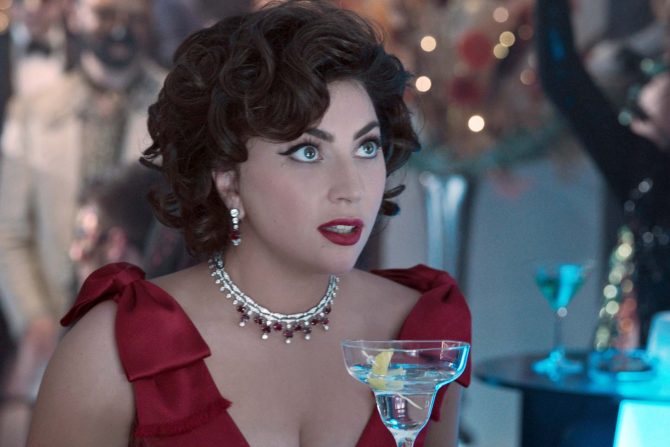 The Diva: House of Gucci

Cinematic titan Ridley Scott returns with his latest outing, a true-crime epic about family, fashion and murder. House of Gucci revisits the saga of the famed fashion house, and the family behind it during the 1980s and 90s. Lady Gaga stars as Patrizia Reggiani, the ambitious lover of Maurizio Gucci (Adam Driver), the nerdy, introverted heir to the Gucci fortune. At Patrizia’s encouraging, Maurizio takes an interest in the family business, working with oafish cousin Paolo (an unrecognizable Jared Leto) and eccentric uncle Aldo (Al Pacino) to manage the business. Of course, as the money begins to pile up, so does the tension, which finds Patrizia and Maurizio at odds with Paolo and Aldo…and eventually with each other. Jeremy Irons and Salma Hayek also star.

House of Gucci borrows from crime epics such as The Godfather to weave family and relationship dynamics into a much larger story of corruption. Lady Gaga fans should swoon—the actress gives a splendid performance here, proving that her turn in A Star is Born was no fluke. Much as her costar Irons did in Reversal of Fortune (which netted him an Oscar), Gaga creates a character of certain opacity: we’re never quite sure if Patrizia is just an ambitious, business-minded woman that fell in love with the right man, or if she’s a full-blown sociopath. It’s the kind of performance that walks the razor’s edge, and that will have viewers racing to debate her motives. Leto and Pacino have a great time clowning as their flamboyant louts, as does Hayek as a nutty psychic. Some viewers may balk at the movie’s 157-minute runtime, or at the film’s numerous plot threads. For audiences able to process it all, and who want to see a queer diva bidding for Awards goal, we suggest looking no further.

After 30 years of hand wringing, fan toxicity and an ill-fated, underrated female-led reboot, the original Ghostbusters return in this kinda-sorta-sequel-reboot. Juno director Jason Reitman takes over from his dad and original Ghostbusters filmmaker Ivan to transplant the story from New York City to rural Oklahoma. Beleaguered mom Callie (Carrie Coon) moves her two teen kids Trevor (Finn Wolfhard) and Phoebe (McKenna Grace) to a dilapidated farmhouse she’s inherited from her recently deceased and long-estranged father (give you one guess who). The bookish young Phoebe immediately becomes enamored of her late grandfather’s strange equipment and, with the help of an unseen hand, discovers his secret laboratory. Phoebe learns of a mounting threat by the demon Gozer (Olivia Wilde as the nonbinary villain of the first film…and yes, the movie refers to Gozer as such), and teams up with Trevor, her classmate Podcast (Logan Kim) and Trevor’s crush Lucky (Celeste O’Connor) to save the world. These fledgling Ghostbusters also get a bit of help from handsome local science teacher Mr. Grooberson (Paul Rudd).

Read no further if you don’t want to know that the original Ghostbusters lineup makes an appearance here, alongside co-stars Annie Potts and Sigourney Weaver (stay through the credits; it’s one of the funniest scenes in the movie). Seeing the original cast return to their respective roles—however briefly, or CGI enhanced—should give lovers of the original movies a warm and fuzzy feeling. For that matter, we fell in love with the kiddie lineup, in particular Ms. Grace, who more or less carries the entire movie on her young shoulders. Mark our words, folks: she’s a star in the making. Given the vitriol directed at the all-girl 2016 reboot, we’re also happy to see the leader of the team this time out is still a young woman. Take that, toxic fans.

Despite Reitman’s skill with actors and the Spielbergian glow with which he shoots this new film, Ghostbusters: Afterlife has polarized critics. Detractors attack the movie for too much fan service and for focusing on the sci-fi elements of the story. The original Ghostbusters is one of the rare films that works as a goofball comedy and a sci-fi/horror adventure; opinions of this sequel/revival may vary depending on which elements viewers loved in the original. For our part, we found it thoroughly entertaining, and while it may have one too many throwbacks to the original, Afterlife avoids the mistakes of Halloween 2018 and The Force Awakens by concocting a new story rather than retreading the original movie. Fun, funny, and rollicking with adventure, we recommend Afterlife for the cast, and for the loving homage it pays to the late Harold Ramis.

A final note, stay all the way through the end credits. We have a feeling there will be more ghostbusting to come.

The show featuring the First Queer Family of Sci-Fi returns for a new mission this week, with queer stars Anthony Rapp, Wilson Cruz, Blu Del Barrio and Ian Alexander all climbing aboard the USS Discovery to save the universe once again. This new season finds newly-promoted Captain Burnham (the always formidable Sonequa Martin-Green) taking the Discovery on a new mission to track a mysterious force wiping out whole planets in its wake. Along the way, the crew of the ship continues to rebuild the United Federation of Planets under the prying eyes of new Federation President Rillak (Chelah Horsdal). The Trill crewman Adria (Del Barrio) also undergoes a process to separate from the consciousness of their boyfriend Gray (Alexander), who wants a new body of his own.

We’ve screened the first four episodes of the show and aren’t quite sure where this new season is headed just yet. That aside, first-rate production design, strong performances, and the sight of a queer family in the 31st century give us reason enough to join this voyage.

Grand diva of music Sarah Brightman celebrates the holidays—and an end to the COVID-19 pandemic—with this new Christmas concert, streaming on PBS just ahead of a US tour. A Christmas Symphony finds Brightman belting out beloved holiday songs both spiritual and secular accompanied by a live orchestra. Brightman also welcomes special guests Aled Jones and her ex Andrew Lloyd Webber for duets. Inspired production design set against the pillars of Christ Church in London gives the show an overall Gothic feel and, of course, Brightman’s soaring soprano vocals bring shimmering life to the music.

Brightman doesn’t get enough credit as a performer—her stage presence, along with the visual theming make A Christmas Symphony more than an ordinary concert; it’s every bit a show, and a delightful one at that. Make sure to catch it this holiday season as a way to celebrate the warmth of the holidays.

Sarah Brightman’s US holiday tour kicks off November 26. Sarah Brightman: A Christmas Symphony airs on PBS throughout the months of November and December. Check local listings.

Anyone dreading spending time with family this Thanksgiving—or perhaps avoiding it entirely—won’t want to miss Die Surely, the satirical short film from directors Ben Simpkins and Jason Hazzard. The short follows the obnoxious, hypocritical Sadstone family that finds its Thanksgiving dinner crashed by the even more obnoxious “black sheep” of the family, Shirley the stoner lesbian. Passive aggression ensues as the family bickers over everything from marijuana legalization to surrogacy to cryptocurrency. Instead of a Thanksgiving dinner, these folks could have sat in for The McLaughlin Group. The presence of a gay couple (played by Queerty fav Zach Noe Towers and Sam DiGiovanni), albeit a vapid one, is always nice to see at the holidays. That said, the greatest virtue of Die Surely might be that it knows carving knives are also good for stabbing. Anyone feeling the urge to get stab-happy with their own family can use this short as an outlet.

Queer R&B singer (and recent MindOut ambassador) Abisha drops her latest single, the sensual, introspective ballad “Numb” this week. The track finds Abisha waxing over feelings of anxiety, dating in the age of smartphone apps, struggling with identity and generally feeling dehumanized. It’s a feeling many of us queer folk know all too well. With a smooth beat and thoughtful lyrics, we suggest giving it a listen. Angst seldom sounds this sexy.

Thanksgiving has arrived, and as such, we suggest an autumnal beverage that combines fall flavor with year-round boozy goodness. Enter the Apple Cider Mimosa, a sweet, tangy effervescent way to spice up your holiday, or any of this week’s Culture Club selections.