The Essential: It’s a Sin

At long last, we queers here in the States get to see what all the fuss is about. In short, it’s deserved. Gay TV impresario Russell T. Davies crafts a tender, angry vision of the AIDS crisis in 1980s London. It’s a Sin follows the lives of a group of young friends celebrating the hard-won victories for gay rights in the 1970s, and the newfound air of sexual freedom. For the record, that entails a season opener which may hold the record for most sex scenes in a single episode. Of course, rumors of a “gay cancer” begin to circulate, and one by one, men begin disappearing.

As we discussed with Davies in our interview, It’s a Sin comes at a pivotal moment when a new generation of queer activists with no memory AIDS have begun to propagate the idea that gay men have never had to struggle in life. That could not be further from the truth. Moreover, the lessons of the AIDS epidemic (including how to deal with denialists, conspiracy theorists and political hacks using the disease as a reason to demonize queer people) offer a path forward in the uncertain times of COVID-19. Tender, mournful, loving and righteously infuriating, it deserves mention alongside Philadelphia, Longtime Companion, How to Survive a Plague, Pose and yes, even Angels in America as one of the greatest works ever about the AIDS epidemic. The lesson is clear: never forget.

The Wicked: I Care a Lot

I Care a Lot follows Marla (Rosemund Pike), a leggy, commanding lesbian running an expensive nursing home with her girlfriend, Fran (Eiza González). Though ostensibly a special home for the infirm, Marla’s home is actually a massive scam meant to rob patients there of their life savings. All goes well until Marla targets Jennifer (Diane Weist), a sweet, if mysterious, older woman with ties to the mobster Roman (Peter Dinklage). Marla and Roman become involved in a bitter standoff over Jennifer’s wealth, and hilarity ensues. Pike gives a fabulous performance as Marla, elevating her beyond caricature or negative stereotypes, while Dinklage proves himself again one of the most interesting and talented actors yet working. Savage, twisted and very funny, we offer it as one of the most offbeat and entertaining movies of the year.

This two-part PBS series examines the 400-year history of African-American churches in the United States, as well as their far-flung, and often overlooked, effect on public life. For the historians interviewed here, that translates to having gay men—usually closeted—leading choirs within the church, and African-American recording artists taking church music and making it gay. The film also indicts the church on its hypocrisy: how a place of worship born of oppression would itself become an oppressor of queer people. Featuring interviews with Oprah Winfrey, John Legend, Jennifer Hudson, Senator Reverend Raphael Warnock, Dr. Cornel West, and Rev. Al Sharpton, The Black Church celebrates an underappreciated force in American public life, and the underappreciated LGBTQ folk that have elevated it to power.

Ok, how could we not include this year’s Queerty Awards, the celebration of the best in LGBTQ pop culture in this week’s list? Of course, because of COVID-19, the usually massive party Queerty hosts in Hollywood each year has gone virtual. On the upside, that means a full-blown show streaming online, hosted by Queerty’s Dan Tracer, and Drag Race alum Heidi N Closet. The broadcast will also feature a musical performance by Bright Light, Bright Light and appearances by Nicco Annan, James Bland, Isis King, Jai Rodriguez, Cameron Esposito, Shangela, Jinkx Monsoon, BenDeLaCreme, Willam, and Veneno star Isabel Torres. Join us for the event, and see who wins.

Speaking of Ms. N Closet, this week also sees the release of her COVID-19 themed music video “GAP.” Closet borrows from Cardi B’s “WAP” to create this new parody short film about life during the pandemic, and all the crazy that comes along with it. Featuring no shortage of references to social distancing, sequins, face masks, Karens, dermal filler, Dolly Parton, circuit party gays and the gap between Heidi’s teeth, it’s a colorful and bonkers tribute to a year of lockdown…one just as bonkers as we feel right about now.

Electronic recording artist Rita Ora returns this week with her newest EP, a collaboration with Imanbek called Bang. Ora has also released a visual version of the album, a short film shot on location in Bulgaria. While the film has no shortage of style, we prefer the single version of her track “Bang Bang,” an electronic pop tune that borrows from the theme to Beverly Hills Cop. The song, quite simply, is infectious and cries out for some dancefloor action with someone sexy. Take that as you will.

The Sip: The Disco Dancer 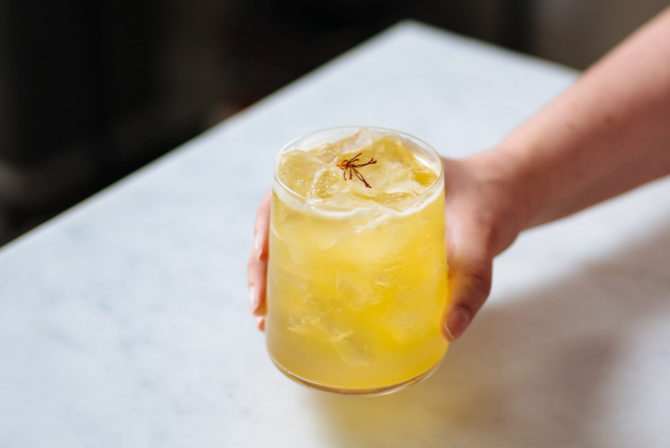 In honor of The Black Church and its fascinating dive into the hidden, spiritual origins of disco music, we offer up this fruity and fizzy variation on a Fuzzy Navel. Strong but not overpowering, sweet but not sickly so, it will pair well with any of this week’s entertainment, no matter how subdued, or outrageous.

Combine orange juice, Galliano, vodka, and bitters in a cocktail shaker over ice. Shake well and pour into a cocktail glass. Top with club soda to taste.