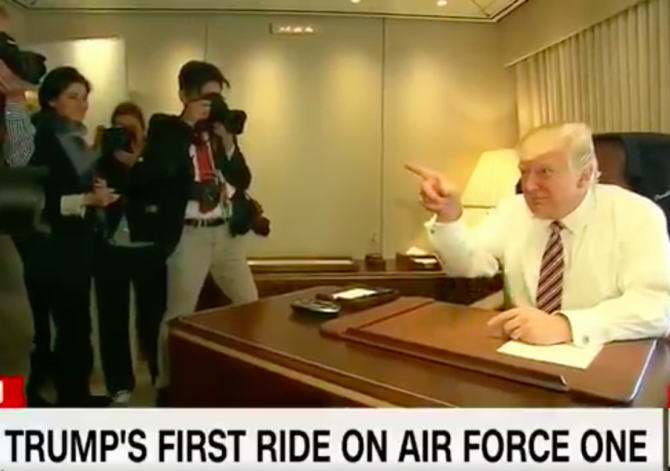 This just in: Donald Trump‘s TV-binging habits are here to stay.

Not only did the New York Times write a whole feature detailing his daily television watching schedule, which includes three hours every morning plus several more hours in the evening, but his aides have been complaining that he won’t stop turning on cable news and obsessing over what people think about him, a claim that seems to be corroborated by his constant whining to the press, who he hates, about what other people (politicians, journalists, celebrities, random folks on Twitter, etc.) are saying about him.

Now, CNN inadvertently captured an example of the Jolly Orange Giant’s obsession when they cut to him riding Air Force One only to discover that, instead of doing his job, he was blabbing to reporters about how “really beautiful” and “great” the airplane was while a television set blared commercials in the background at a near-deafening volume.

That’s right. The 70-year-old leader of the free word (cringe) couldn’t even turn it off (or down) for five minutes to talk to reporters.

h/t: If You Only News