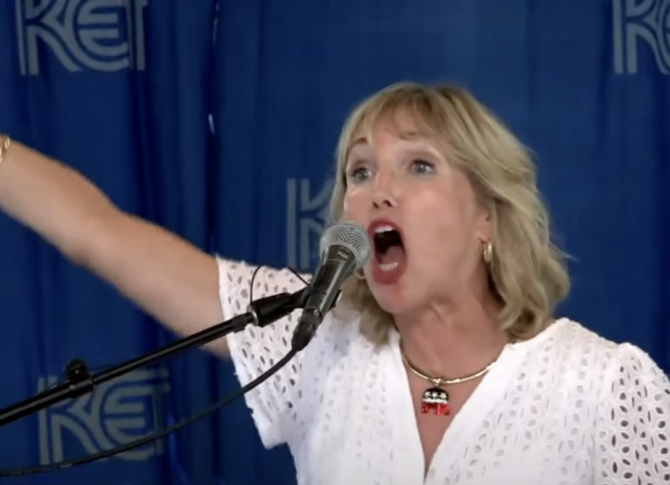 Alleged Russian asset and COVID-denier Rand Paul wished his wife, Kelley, a very happy birthday on Twitter over the holiday weekend and, honestly, we’re offended on her behalf.

Related: Rand Paul said something shocking about Ukraine and he might want to stay off Twitter today

“Happy birthday to my brilliant and beautiful wife @KelleyAshbyPaul!” the homophobic senator tweeted, along with a suuuper pixelated photo of 59-year-old Kelley  at the 2021 Young Women’s Leadership Summit hosted by the anti-LGBTQ hate group Turning Point USA.

? Happy birthday to my brilliant and beautiful wife @KelleyAshbyPaul! pic.twitter.com/t18GvU2xod

Seriously, why that photo???

Rand and Kelley have been married since 1990 and have three children. They have also survived at least two near-death experiences together.

In August 2020, they claimed they were almost killed when a group of peaceful protestors approached them on their on their way back to their hotel from the White House following Donald Trump‘s 2020 Republican National Convention speech. The couple was flanked by armed police officers the entire time.

And in May 2021, they accused adult contemporary singer Richard Marx, best known for his 1989 worldwide hit single “Right Here Waiting”, of mean tweeting them, which then inspired someone to send a suspicious package to their home in Kentucky. Authorities quickly determined the package was harmless.

In addition to being married to Rand Paul, which is offensive enough, Kelley is a raging homophobe and transphobe who loves to spout anti-LGBTQ hate on Twitter.

In February, she tweeted her support for transphobic children’s author JK Rowling. In March, she tweeted her outrage over an elementary school in Austin, Texas that held a Pride parade for students on year earlier.

Related: Rand Paul’s wife is losing it on Twitter over Chinese third graders, math, and men having babies

Just last month, she cracked transphobic jokes and spoke against trans athletes during a speech on her husband’s behalf at the Fancy Farm Picnic in Kentucky.

“I wouldn’t expect the Democrats to know what a recessions is,” she said. “They can’t even define what a woman is!”

She’s the one that got busted for insider trading while you were denying COVID. Right?

How brilliant can she be if she is married to you? 🤔

Intriguing that you chose this low-fidelity image of your wife. Could this also be an indication of your low-fidelity behavior toward her, Senator?

She deserves better. But happy birthday!

Did you take a picture of your TV?

Any fewer pixels, and this would be radio

The wife all in with the pedophiles, too? pic.twitter.com/5OZL7cbKxJ