Well, Awards Season may be over–both the Oscars and the Queerties were last week, signaling the close, but thanks to the miracle of streaming and old-fashioned good filmmaking, we’ve no shortage of great projects to keep us entertained.

This week skews a bit heavy, but that said, the darker projects here are not to be missed. Have a look, book your tickets and set the DVR…

The Step Out: Greta

Oscar-winner Neil Jordan (The Crying Game, Interview with the Vampire) takes on the psycho-biddy horror genre with this thriller. Chloe Grace Moritz (The Miseducation of Cameron Post) stars as Frances, a young woman who befriends the title character, an aging musician and widow played by Isabelle Huppert (Elle). What begins as a sweet mother-daughter relationship turns into a pathological obsession with some big scares and some wry laughs, courtesy of Huppert’s deliciously deranged performance.

The Italian soap about three young men—two sons of mafiosos, one son of a cop—who develop an unlikely friendship amid warring crime families in Rome returns with a wallop. Plenty of alliances, backstabbing, betrayals and scheming keep the suspense ratcheted up, though we can’t deny that the biggest hook for us is still the adorable Spadino (played with gusto by Giacomo Ferrera), the gay, crazypants, Godfather in training. This season he manages to land a boyfriend, and make a bid to take control of his crime family. Available both with English subtitles and an English dub, Suburra makes How to Get Away With Murder look like How to Get Away with Jaywalking.

The Chiller: Abducted in Plain Sight

For an exercise in true, stomach-churning terror, look no further than this documentary about a young girl abducted by a pedophile neighbor—twice. Actress Jan Broberg (At the Devil’s Door, Criminal Minds) recounts growing up in a traditional Mormon family in Idaho, with a charming next-door neighbor named Robert Berchtold who showed an intense interest in her from a very young age. Berchtold also engaged in affairs with Jan’s mother and her father to get closer to the family and to eventually abduct Jan to Mexico where he hoped to marry her as a child bride. Broberg and her family recount in stomach-churning detail how Berchtold charmed and seduced the family to get at Jan, as do Berchtold’s own kin. Few documentaries have this kind of access or this level of honesty.

Leaving Neverland debuted last month at the Sundance Film Festival where it set of an immediate sensation and prompted audience members to flee the theatre in hysterics. The reason: the two-part documentary presents lurid testimony and a wealth of evidence of Michael Jackson’s abuse. Two adult men—James Safechuck and noted choreographer Wade Robeson—recount sexual relationships with Jackson that began when they were 10 and 7, respectively, not to mention years of lies and confusion that followed. Jackson’s estate has already filed a lawsuit to block the doc from release, and a number of his hardcore defenders have attacked the film before it even airs. In short: don’t miss it.

Not to be confused with the similarly titled Whitney: Can I Be Me, this Whitney Houston documentary got the full endorsement from the late diva’s family. Other close friends, collaborators and even Bobby Brown also participate to tell the story of Whitney’s life, demons and all. Though her family long denied it, Whitney also acknowledges Houston’s bisexuality, including her long lesbian relationship with Robyn Crawford. The bigger revelation, however, comes from several close family members—including Houston’s brother—who reveal that Whitney was sexually abused as a child by her aunt Dee Dee Warwick (sister of Dionne), and how that abuse fueled Whitney’s downward spiral into drug addiction. Elegiac and tender, Whitney is a must-see for fans of the singer, or for anyone that loves a showbiz story.

Fresh off their wins at the 2019 Queerty Awards, we feel compelled to recommend two of the best films of last year. Love, Simon, of course, is the teen romantic comedy about a boy trying to come out and discover the true identity of his online boyfriend. Boy Erased, based on the memoir of Garrard Conley, details the horrors of conversion therapy, as well as the dubious motives of those who champion the practice. Though one plays as comedy and the other drama, both films offer hope for the future of queer people.

The Sip: The Smooth Criminal 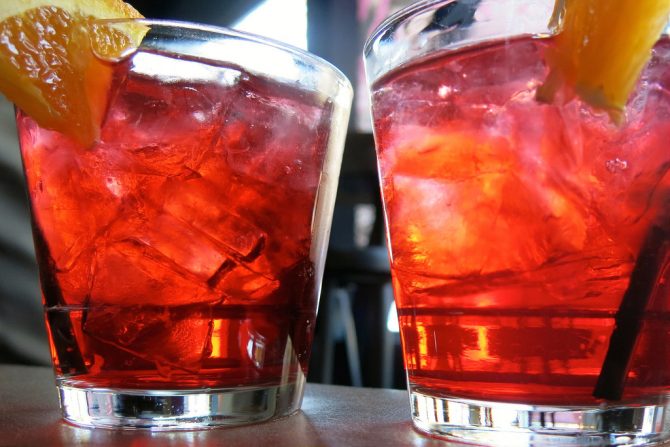 Regardless of how you feel about Michael Jackson, before, during or after seeing Finding Neverland–or, for that matter, some of the other titles we recommend here–we acknowledge that reliving his legal woes make us crave a stiff drink. Accordingly, sip on this rather strong variation of a Cape Cod.