Whatever your entertainment needs, we got your back (and hopefully your mind) with Queerty’s weekly “Culture Club” column with some of the highlights of new releases, streaming shows, classics worth revisiting, and what to drink while you watch. This version of the column runs through the end of 2020 due to the holidays.

Call us crazy, but since we’ve not had a proper blockbuster all year, we’re a bit excited to see a mega release, especially one with our favorite bisexual superheroine. Wonder Woman 1984 sees Gal Gadot return to the role that made her a star, this time in a 1980s period setting. Plot details remain mum, though we know the plot does involve the discovery of an ancient stone that can manifest the heart’s deepest desires. For Diana, that means the return of her long-dead love Steve Trevor (Chris Pine, once again). But the nefarious Maxwell Lord (Pedro Pascal) has designs of his own in mind, and the insecure Barbara Minerva (Kristen Wiig), wants to be a bit too much like Wonder Woman. Also, big fans of the character should be sure to sit through the end credits for a very sweet tease at the future of the series. We can’t wait.

In theatres and available on HBO Max December 25.

This indie movie arrives this week for awards consideration. We’re not sure it will net much given a plot designed as both satire and drama. Promising Young Woman follows Cassie (Carey Mulligan), a young woman who seems trapped in high school well into her 30s…and who delights in seducing and humiliating men. When she falls for a handsome former classmate, can she continue her vigilante justice? Mulligan is simply great in the lead, while Laverne Cox, Alison Brie and Bo Burnham shine in pivotal supporting roles. Promising Young Woman will likely start love-it-or-hate-it arguments based on its premise, twisting ending, and treatment of sexual exploitation, but then, maybe that’s the whole point. For our money, it’s a tense and original thriller with a wicked sense of humor.

What better way to wrap up the year than with some new output from Frameline, the San Francisco-based queer media arts foundation. This year’s Voices program consists of four new, short films that explore the queer experience:

Even better, this year’s program can be viewed from anywhere and at no additional cost beginning Christmas Day. Each film will also find its way to YouTube at the rate of one per month; Flood has already arrived on the service. It’s a fine way to enjoy emerging artistic voices from the community, and to add a healthy dose of gayness to the holidays.

Anyone looking for a bit of excitement on New Year’s Eve—and let’s face it, you probably are—search no further. Pop queen Kylie Minogue is throwing her own celebration in the form of Infinite Disco: a pre-taped concert featuring tracks off her number one album, Disco. In addition to performing the album, Ms. Minogue also adds in a few other fan-favorite tunes under new arrangements. Since we can’t go out to see an actual concert, or to some euphoric dance floor, we suggest Kyle’s home dance party as a suitable alternative.

This new short film stars actor Jason Stuart (Smothered), a performer developing a specialty when it comes to playing angsty middle-aged gay men. Hank follows its title character (Stuart), a married man trying to get used to the idea of an open relationship. As Hank’s husband (Jay Disney) goes on about hooking up, Hank tries to find a connection with an adult discussion group, and later, with a handsome, younger man. Stuart gives a fine, nuanced performance in story that begs the question: how can someone assert independence and maintain a long-term love? By turns funny, sad and sweet, Hank pulls at the heartstrings, and addresses very real questions long-term couples face.

The Timely: Cody Belew’s “Hang Your Hat on My Christmas Tree”

Out-gay country singer Cody Belew contributes his own composition as part of the 2020 queer holiday deluge, this track from the Dashing in December soundtrack. As with the accompanying film, Belew mixes country twang with the sweet scenery of Christmas, as well as a hearty dose of romance. The accompanying video finds Belew clad in an ugly Christmas sweater & sequin pants flirting up a storm in a very gay bar. But then, who among us hasn’t done that at least once? With a crooner as cute as his lyrics, Belew exudes charm as he line dances under the mistletoe. We recommend giving the video a watch, if not to add it to your usual rotation of holiday music, than to at least enjoy the sight of Belew’s boogieing.

Speaking of deluges, the flurry of dragtastic competition shows continues as RuPaul’s Drag Race launches its 13th season this New Year’s Day. This season also features the debut of Gotmilk, the very first transmasculine queen to join the cast of the show. How will he fare against the rest of the competition? Tune in to find out, as well as enjoy all the humor, glam and drama of the Emmy-winning series. Here’s hoping this season also avoids any real scandal, a la Season 12’s Sherry Pie sexual harassment woes.

A reader tipped us off to this creepy Facebook Watch series, a contemporary retelling of the Pied Piper folk tale. Kinderfanger stars Walking Dead actress Angel Theory—a real-life, hard-of-hearing, African-American queer woman—as Olivia, a hard of hearing woman on the trail of a string of child abductions. When one of her close friends goes missing, Olivia joins forces with Wallace (Alexander Neher), an investigative reporter on the trail of The Piper. Kinderfanger benefits from atmospheric direction on the part of Bridger Nielson, as well as a self-assured performance by Theory. With the Season Finale set to air this New Year’s Day, we recommend catching up on the show for its marvelously twisted tone, as well as for Theory’s performance which announces her as a queer, disabled actress on the rise. 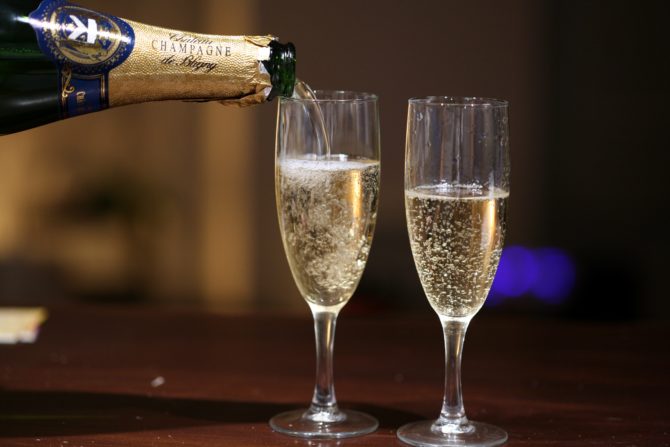 Ok, yes, it’s a bit of a cop-out. Then again, when else is a better time to sip champagne but the holidays? Grab a bottle of your favorite vintage–we recommend a sweet spumante–pop the cork, and enjoy. It pairs well with Christmas brunch, sitting on the couch with a holiday film, or while counting down the clock to end this miserable, COVID-ridden year. Here’s to the end of Trump, COVID-19 stupidity and the coming of a brand new era…not to mention a vaccine. Bottoms up, indeed!