Hollywood is a fickle mistress, even for those who prefer the company of men.

Just ask extraordinarily talented openly queer actor Rupert Everett—or better yet, don’t, since he can’t stop talking about the fickleness of Hollywood. For the uninitiated, Everett became one of Hollywood’s rising stars back in the 1990s. Turns in indie films like Shakespeare in Love and The Madness of King George earned him acclaim, before he reached full-blown stardom in 1997 with his role in My Best Friend’s Wedding as Julia Roberts’ gay bestie. A bright career seemed certain, as Everett continued to win acclaim for his performances in films like A Midsummer Night’s Dream and An Ideal Husband.  Through it all, Everett did something even bolder that at the time was extremely rare for celebs: he lived as an openly gay man.

Though plenty of out-gay actors today—Ellen Paige, Zachary Quinto, Neil Patrick Harris—have thriving Hollywood careers, in the 1990s, gay actors seldom discussed their sexuality for fear of career suicide. In 1997, the same year as Everett’s breakout in My Best Friend’s Wedding, Ellen DeGeneres had come out as a lesbian, only to find her sitcom cancelled and career in shambles shortly thereafter. Everett, however, refused to go back into the closet, and while he seldom discussed his romantic life, never showed the slightest hint of shame in his queerness.

What a shocker, then, that Everett has spent the past decade telling queer actors that they should stay in the closet, decrying same-sex parenting, and spouting bitchy jibes about gay Pride events, Elton John and the American character. What the Hell happened?

To hear Everett tell it, his openness about his sexuality destroyed his career. His grousing, however, overlooks several other major forces, starting with The Next Best Thing. Flash back to 2000: though Ellen had landed on the chopping block, a new sit-com called Will & Grace about a straight woman and her gay best friend had attracted wide critical acclaim, and a large audience. Hollywood then came up with another seemingly great idea: use a similar premise for a film, and have it star a real-life queer actor and a gay icon. Studio Paramount pushed for Everett to play the lead, and when he hesitated, allowed him script control and producer status. When his friend Madonna signed on to play the female lead, Everett agreed to star.

The Next Best Thing proved a troubled production with an even more disastrous release. Critics savaged the film, which flopped at the box office. The film ended the long, prestigious career of Oscar-winning, queer director John Schlesinger. Madonna’s acting career screeched to a near-halt (her discography took a hit too, thanks to a torturous cover of “American Pie” on which Everett sang back-up). Everett’s suffered too, particularly after Schlesinger’s longtime boyfriend Michael Childers penned a letter to The Advocate blaming Madonna, and in particular, Everett, for the failure of the film—and for Schlesinger’s rapid health decline following production. (The director suffered a stroke in 2000 following the release of The Next Best Thing, and died in 2003.)

The Next Best Thing had a detrimental effect on Rupert Everett’s career, especially after Paramount claimed that the studio had fired him from both writing and producing duties, attributing much of the troubled production to Everett’s behavior. He’s not the first star to have a bomb hurt his career. Still, he continued to work, providing the voice of Prince Charming in the Shrek series, and appearing in other hit movies like Stardust. Around the same time as The Next Best Thing, Everett also began to lobby to take over the role of James Bond from Pierce Brosnan. The actor also said he wanted to play Bond as gay. Needless to say, that didn’t happen although of course it should. (Might finally be a good way to finally say something new in the blockbuster series.) 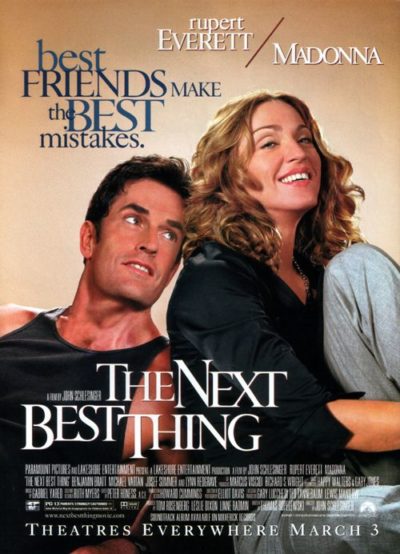 Of course, Everett never mentions the debacle of The Next Best Thing, and his sometimes alienating sourness. No, according to Everett, homophobia alone wrecked his career, though not to the point he ever found himself unemployable–or where his considerable acting talent and charisma went unnoticed. In fact, a lot of actors, most of whom spend most of their careers unemployed and underpaid, would die for his career: He has never stopped working in film—he appeared in Miss Peregrine’s Home for Peculiar Children in 2016. Next year, he will appear as Oscar Wilde in The Happy Prince, a biopic of the gay rights trailblazer which Everett spent eight years developing.

In short, for a career allegedly destroyed by homophobia, Everett seems fairly well off. To some extent, Everett is probably right that his queerness contributed to career woes; consider that only one out-gay actor has ever won an Academy Award. Many on the business side of Hollywood—agents, managers and corporate suits—still harbor a great deal of acrimony toward queer folks, often openly so. Still, Everett always omits one curious element from his litany of career wrongs: bad choices. For Rupert Everett, coming out as gay did not constitute a bad choice. Mean comments, playing the victim, and being associated, rightly or wrongly, with disaster of a film did.

So dear Rupert, if you’re reading this, we all still love you, and look forward to your next outing. You have a lot of great years and films ahead of you. We are grateful you paved the way for young actors to be themselves as never before.

Before you go complaining again about homophobia and how much your career sucks though, stick your copy of The Next Best Thing in the DVD player. Watch the film. Then come back and talk to us.