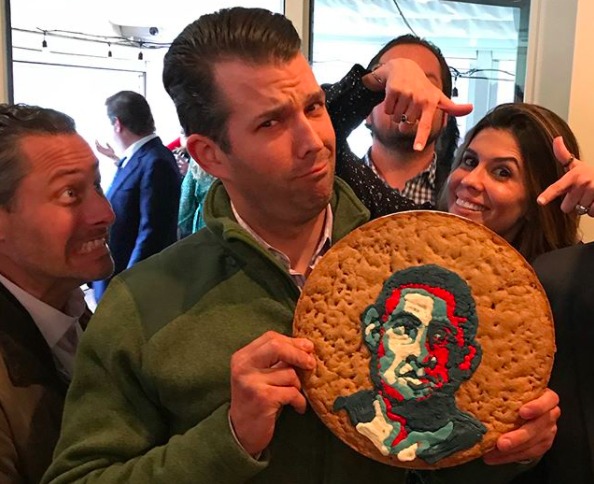 It appears Donald Trump isn’t the only one with a  hang up over President Obama. His eldest son Don Jr. seems to be equally obsessed with the 44th President of the United States of America.

Over the weekend, Don Jr. celebrated his 40th birthday by… trolling President Obama.

That’s right, folks. On Sunday, Little Donnie posed for a photo alongside Ted Cruz at Le Bilboquet in Dallas. In it, he twists his face in disgust whilst holding giant chocolate chip cookie frosted with Obama’s face.

The photo is captioned, “With friends like these…some good friends decided that while my birthday is not for two weeks that they would get me an early 40th birthday cake. And what birthday is complete without an Obama cake?”

With friends like these… some good friends decided that while my birthday is not for 2 weeks that they would get me an early 40th birthday cake. And what birthday is complete without an Obama cake? I figured it was so good that I would have to share it with Ted. ??????? #tx #texas #birthday #tedcruz #obama #cake

Now for the comments…

“You wake up thinking about Obama… it’s embarrassing,” one person wrote on the post. “I’d say move on but there isn’t anything to move on from! Your whole family just can’t stop mocking Obama. WHY!!!!”

“You’re an inbred twerp,” another added.

“You think this is humor but whine like a snowflake about the way your father and family are treated,” a third person commented. “You wouldn’t know respect if it bit you in the rear.”

A fourth person said, “@donaldtrumpjr you’re a joke just like your dad. He @barakobamais more of a man than you or your father will be. Can’t wait for 4 years to be over. #gettrumpout.”

Related: Don Trump Jr. can’t wait for the next four years ‘to be over.’ Join the f-ing club!

“You are a perfect example of someone who doesn’t have enough money to buy yourself an ounce of class,” someone else wrote.

“They must have a lot of resentment and jealousy to be still going after Obama at this point,” another noted.

And then there’s this: “Another Trump not fit to clean the toilets in the Obama Presidential Library.”

Related: Eric Trump shares his creepy thoughts on nepotism and the reason his family is so “innately close”