Actress Kristen Wiig, having just proven herself capable of a dramatic/action role in Wonder Woman 1984 returns to comedy with this ultra-bizarre and ultra-funny romp. If Austin Powers and Drop Dead Gorgeous mated, they might give birth to Barb & Star Go to Vista Del Mar. The movie follows two middle-aged Midwestern besties (Wiig & Annie Mumolo; the pair also penned the script) on a spontaneous vacation to south Florida. Little do they realize their destination has also become the target of a vindictive supervillain (played by an actor whose identity we’ll not reveal here), who vows to wipe the city off the face of the Earth. Skulduggery, hilarity and even a threesome ensue when Wiig’s Star falls for Edgar (a very game Jamie Dornan), a secret agent sent to set the evil plan in motion. Damon Waynes, Wendi McLendon-Covey and a certain gay icon also have cameos. Oh, and did we mention the musical numbers?

Filmmaker Ollie Lucks documents his foray into polyamory and bisexuality in this new HBO doc. For Lucks and his fiance Zoe, engagement presents an opportunity to make up for lost time by opening up the relationship for some sexual exploration. For Ollie, that means meeting men on Grindr and learning to bottom on camera. Really.

The Inspirational: Amend: The Fight for America

Arriving in honor of Black History Month, this Will Smith-hosted series explores the far-reaching impact of the 14th Amendment, which guarantees equal protection under the law. Amend: The Fight For America provides a comprehensive look at how one struggle for Civil Rights begets another, connecting the dots between the push for African-American rights to Women’s liberation to the struggle for LGBTQ equality. Episode 5 of the series deals specifically with the queer experience, and examines the issues far beyond marriage equality issues: a gentle reminder: until 2003, gay sex was still a crime in at least ten states, punishable by fines and prison terms. In an era where ongoing movements against sexism and racism cry out for allies, Amend provides a gentle and inspiring reminder: injustice anywhere is a threat to justice anywhere. We’re all in this together, folks.

Speaking of Black History Month, this online theatrical experience celebrates African-American history in one of the most unique and ambitious productions in recent memory. As conceived by Yale professor Ethan Heard—also known as the drag queen Trixie Spirit—Breathing Free reimagines the opera Fidelio as a contemporary series of scenes staged around the Black Lives Matter movement. Featuring actual prison choirs, the song cycle also mixes the music of black composers into a pastiche of the struggle for equality, and the realization of the American dream. Poignant, powerful and performed with ferocious singing and acting, it’s a testament to the African-American experience like no other.

Streams February 10 and 13 at TheBroadStage.org.

Filmmaker/actress Jenna Laurenzo (Lez Bomb, Green Book) returns with this sequel to her 2015 short film Girl Night Stand. This sequel catches up with the main character, Katie (played by Laurenzo) during the COVID-19 pandemic. Starved for company, Katie reaches out to her former one night stand Sarah (again played by Meryl Jones Williams) for a catch-up. What starts as a friendly meeting reignites the old spark, and the pair must face the question: do they just miss the sex, or do they have something special together? Hey, people of all genders often face the same question, so, fortunately, Laurenzo does so with good humor and charm. Moreover, given the way the pandemic has made us reassess our own sex lives, we recommend giving it a watch.

The Nibbles: So Far, So Close

Queer writers Michael Varrati (Tales of Poe) and Brandon Kirby (I’m Fine) pair for this new digital series penned and shot during the COVID-19 pandemic. In a refreshing twist, however, the show isn’t actually about the pandemic; it concerns itself more with how technology promotes and inhibits our ability to connect. Technically, as an anthology series, each episode also adopts a different group of characters, and a different tone ranging from comedy to horror to sexually charged. That said, the show has a clever way to draw all the characters and storylines together into a much more interesting story, and to make a profound philosophical observation about our relationship with technology. Told in bite-sized 10 to 20-minute episodes, and featuring an appealing young cast, we suggest giving it a watch. No doubt it will strike a chord with anyone who feels trapped by their own smartphone.

Philanthropist, activist and actress Angelica Ross adds yet another title to her impressive resume this week: pop siren. Her new single, performed alongside dance diva DJ Ultra Naté and New York performance artist Mila Jam channels the early work of RuPaul and Todrick Hall at his best into a dancefloor-ready electronic jam. Best of all, the proceeds from the singles go to three transgender charity organizations: The Sylvia Rivera Law Project, The Marsha P. Johnson Institute and The GLAAD Transgender Media Program. Give it a listen, and live fierce. 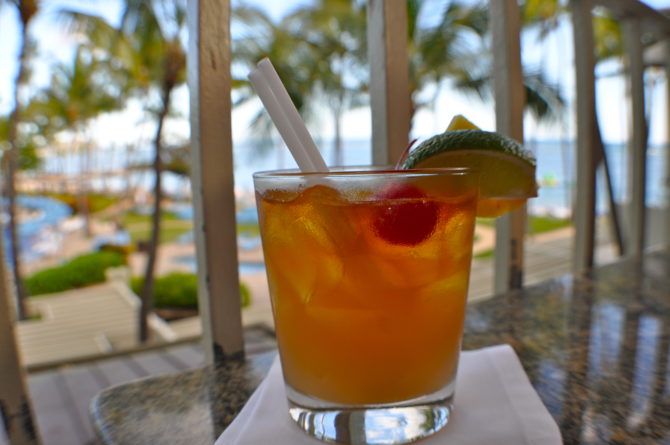 In honor of Barb, Star, Vista Del Mar and our own yearning for a tropical non-pandemic vacation, we offer up this week’s libation: the classic mai tai. Imbibe this sweet blend of fruit and spiced rum, and imagine being on a beach, with or without Jamie Dornan as a side dish.

Mix in cocktail shaker with ice. Shake well. Pour–don’t strain–contents into a cocktail glass. Option: garnish with an orange, lime or mint sprig.