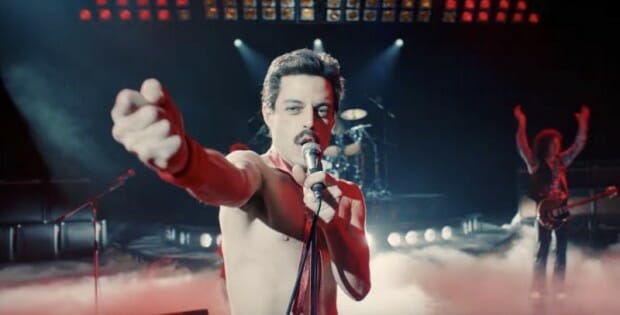 Summer movie season 2018 has yielded its share of crowd-pleasers (Deadpool 2), festival hits (When the Beat Drops) and major duds (Solo).

But as the craze to beat the heat in a chilly cinema dies down, we can’t help but look ahead to the fall when another barrage of would-be blockbusters, Oscar contenders, and franchise tentpoles lands on screen again.

The 14 pictures highlighted here mix studio fare with documentaries, raunchy comedy and indie darlings for a list of the movies we just can’t wait for later this year.

Grab the calendar and start marking off dates, grab the phone and start asking out dates, and have a look at the trailers for the upcoming blockbusters that have us oh-so-excited.

Scantily-clad Jason Momoa, anyone? The Game of Thrones hunk made his Justice League character one of that movie’s highlights. Now he gets the solo treatment, in a film that co-stars Amber Heard, Willam Dafoe, Patrick Wilson and Nicole Kidman. Then again, let’s face it: Momoa’s bare chest is the real co-star. Expect plenty of wetness after.

Glenn Close makes yet another bid for an Academy Award (how is it she doesn’t have one yet!?) for playing the put-upon wife of a famous writer. Jonathan Pryce and Christian Slater co-star, though already Ms. Close has begun to generate some serious Oscar buzz. Maybe she’s finally due?

Once upon a time, The Muppets had a bigger audience beyond the kiddie viewers the famed puppet troupe has played toward in its post-Disney phase. The Happytime Murders aims to recapture the original violent, innuendo-laden tone of The Muppets in this detective comedy helmed by Brian Henson, son of Muppet founder Jim Henson. Melissa McCarthy and Elizabeth Banks co-star in a movie that aims to do for puppets what Who Framed Roger Rabbit did for animated characters.

Rupert Everett stages his own Hollywood comeback and makes a bid for auteur cred as well with The Happy Prince. Written, directed and starring Everett, the movie follows Oscar Wilde‘s affair with Lord Alfred Douglas, his subsequent trial for homosexuality and his life following his prison sentence. Everett steps into the role of Wilde and directs a cast that includes Colin Firth, Colin Morgan, Emily Watson and Tom Wilkinson.

Wait a second. Before Poppins purists begin grousing about this long-delayed sequel to the Disney classic, please keep three things in mind. First, author P.L. Travers wrote a full series of books featuring the magical nanny which serve as the basis for the new movie. Second, Marc Shaiman, composer of Book of Morman and Hairspray, banged out the new music for the story. And third, the cast features Angela Lansbury, Lin-Manuel Miranda, Meryl Streep, Colin Firth, Ben Whishaw and Emily Blunt, who takes over the title role from Dame Julie Andrews. Oh, and though Ms. Andrews declined to cameo, original film star Dick Van Dyke (at age 92) is on hand to play a supporting role. Jolly holiday, indeed.

6. Fantastic Beasts: The Crimes of Grindelwald

J.K. Rowling takes us back to the Wizarding World again in this follow-up to the 2016 hit. Eddie Redmayne, along with most of the original cast returns (including the Emo-hunky Ezra Miller) to their roles joined by Jude Law as the young, gay wizard Dumbledore, and Johnny Depp as the evil Grindelwald. Naturally, the plot is under wraps, but given the Hitleresque role Grindelwald played in the first Fantastic Beasts, we expect plenty of magical mayhem.

Tom Hardy expands his superhero repertoire, stepping into the notorious anti-hero from the Spider-Man comics. We’re not sure if this film is actually connected to the current Marvel Cinematic Universe and ongoing Spider-movies with Tom Holland, though Holland reportedly showed up on set to do a brief cameo. Regardless, we can’t wait to see the ever-hot Hardy drenched in goo and shooting ropes. It’s how his Venom suit works, folks.

Finally, after the years in Development Hell and director Bryan Singer‘s dropping out of the film halfway through production, the long-awaited Freddie Mercury biopic hits the big screen. Rami Malek stars as the queer rock legend, in a story that follows the rise of the band Queen, Mercury’s hard-partying bisexual affairs and his subsequent death to AIDS. Given all the bloody production headaches, can the movie actually be good? Time will tell, though the latest trailers featuring Mercury’s affairs with men–along with Malek’s eerie semblance to the real man–give us hope.

Though it shares a title with the original, 1978 horror classic, this new film actually qualifies as a sequel and one that aims to nullify the countless others, in fact. Picking up 40 years after the original, the new thriller finds psycho killer Michael Myers again rampaging Laurie Strode (once again embodied by the ever-awesome Jamie Lee Curtis). Curtis alone would offer a good reason for us to look forward to this horrorfest, though the involvement of series creator John Carpenter–who has said he wanted to make the scariest film of the series–seals the deal.

Get the Kleenex. Oscar-nominee Lucas Hedges joins winners Nicole Kidman and Russell Crowe in this drama about the son of a Baptist preacher who comes out of the closet. Based on a true story, Boy Erased follows the journey of Jared Eamons through the torture of conversion therapy, and into the life beyond. Troye Sivan, Flea, and Cherry Jones also star, as does Joel Edgerton who takes on writing/directing duties as well.

Keira Knightley leads this Sundance hit, a biopic of the famous bisexual French writer, author of the proto-feminist novel Claudette. After years of her husband stealing credit for her work, Colette vows to emancipate herself, beginning an affair with the gender-fluid Mathilde and setting off to become a famous author in her own right. Colette already has earned rave reviews for Knightley’s performance, and given producer Christine Vachon‘s (Carol, Hedwig and the Angry Inch) penchant for earning her projects Oscar nominations, look for Knightley to generate some significant buzz.

Oscar nominees Saoirse Ronan and Margot Robbie do the costume drama thing in this historical piece about Queen Elizabeth I and her cousin/rival Mary Stuart. To the uninitiated, Elizabeth and Mary became the focal points of the Catholic-Protestant conflict in 1500s Britain, amid political pressures for all-out civil war. Expect plenty of intrigue, faux accents, medieval feminism and a soaring costume budget, not to mention some delicious monologuing from the film’s two leading ladies.

You may not know his name, but you know his work. Howard Ashman, the brilliant lyricist behind Little Shop of Horrors, The Little Mermaid and Beauty and the Beast lived a life of creativity, drama and wild ego as he transformed pop music and the Disney brand for all time. This documentary, directed by Disney animation icon and personal friend of Ashman, Don Hahn, aims to spotlight the creative genius of its namesake, including his private life as a gay man and sudden death from AIDS in 1991.