After weeks of botched categories, Kevin Hart intransigence dropped music, and other missteps, the Academy Awards have arrived. Despite the uneven runup, we can’t help but get excited for a night of glamour, teary speeches and crazy red carpet fashion choices. With multiple flutes of champers, of course.

We’ve analyzed the top categories with our predictions. Have a look, contemplate our reasoning for all it’s worth.

A category known for upsets and head-scratchers, predicting Best Supporting Actress feels impossible. This year already had a shocker in the nomination of Marina de Tavirafor for Roma, which may predict that she has an edge. On the other hand, Regina King has racked up the trophies for her work in If Beale Street Could Talk, which makes her a safer bet. Adams has given better performances before and lost, Vice seems to have lost momentum. Weisz and Stone both already have Oscars, and The Favourite had a heck of a lot of momentum going into the season. With star Olivia Coleman’s chances fading (more on that in a moment), the Academy may slip the statue to Weisz to reward the film as a whole. We’d be OK with that.

Few performances enchanted us the way Richard E. Grant brought to life his New York vagabond in Can You Ever Forgive Me? If we had our way, he’d take Oscar home. Sam Rockwell won last year and given the slowing momentum for Vice and the cartoonishness of his performance, we can’t see him winning again. Why Adam Driver is included here is anyone’s guess; he’s the most forgettable thing in BlacKKKlansman. That leaves Elliot and Ali. The former has a long and respected career as a character actor, and he does give the best performance in A Star is Born. Ali has won in this category before, though has nabbed just about every major award out there for his work in Green Book. That film has come under scrutiny for major factual inaccuracy since the nominations, and the writer of the film, Nick Vallelonga, has come under fire for anti-Muslim tweets as well. That might stifle Ali’s chances, though for the safest bet, look for him to repeat. Given that he plays a gay man in the movie, we can’t bellyache about him winning too much.

Two words folks: Glenn Close. She’s widely considered one of the greatest actresses alive, and that she hasn’t taken home the Oscar after seven nominations remains one of the injustices in Academy history. She’s proved to have the momentum this year with her understated and powerful work in The Wife. That will likely overshadow the work of Aparicio (who’s nomination was a surprise), and that of Lady Gaga, who will take home the statue for Best Song. Coleman has a shot, but when paired against Close, she’s lost almost every time. Truth be told, McCarthy gave the best performance of this lot, though her work as an alcoholic lesbian writer will likely not have enough love to put her over the top. With that in mind, we will gladly cheer a Close win, which will hopefully bring us closer to that musical remake of Sunset Blvd.

Bale’s solid work as the devil incarnate Dick Cheney in Vice cries out for consideration, even if the movie as a whole fails to put his performance to good use. Dafoe’s inclusion surprised Hollywood, and while he may be due (four nominations and counting), At Eternity’s Gate hasn’t had the exposure of the other films here. Mortensen, one of the most liked actors in Hollywood, might have a shot as the white savior in Green Book. Working against him: his co-star has taken home one award after another, and the backlash to Green Book as a whole, Mortensen’s chances look slim. Having directed himself, and given his heartthrob stardom, Cooper could win as an over-all award to A Star is Born. In another year, Rami Malek would have a lock, though, given the recent allegations against director Bryan Singer (as well as his well-publicized fights with Malek on set), Bohemian Rhapsody might be tainted in the eyes of Academy voters. So who wins? Just flip a coin and say…

Spike Lee scored his first nomination for BlacKKKLansman, some of his best work to date. We’d vote for him given the chance, but don’t think the Academy would do the same. Pawel Pawlikowski’s inclusion here was a shocker, so we’ll assume the nomination is also his prize. McKay’s spot here also shocks us a bit, given the one-dimensional nature of Vice and some bizarre directorial choices, we don’t see him winning. Any other year Yorgos Lanthimos, always a critical darling, would have a shot at the statue, though given that previous winner Alfonso Cuaron has won almost everything for Roma, he has a near-lock. 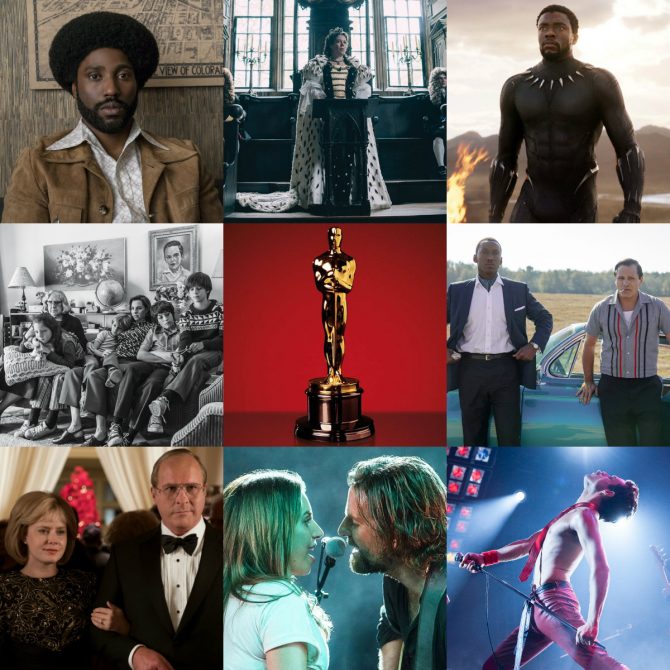 Talk about an open field. The spread of the precursor awards makes the biggest category of the night hard to predict, as does the Academy’s new voting procedure that has voters rank their choices. That’s how a film like Spotlight beat out a much more competitive field in 2015. With that in mind, Vice, A Star is Born and BlacKKKlansman will probably fall by the wayside. Bryan Singer’s omission from the Director category, as well as his recent charges of misconduct, will likely jinx Bohemian Rhapsody.

Green Book has suffered a similar backlash (see above) and since the film has a by-the-numbers plot, it won’t attract voters looking for something more innovate. Then again, the Academy tends to lean a bit conservative, and the film’s message of racial unity might give it an edge. The Favourite’s stock seems to have fallen compared to the critical darling Roma, and may benefit from the ranking voting process. Ditto Black Panther, which Marvel/Disney has really pushed in campaigning. Roma may have an edge, but it also has one major force working against it: it’s not in English. No foreign language film has ever won Best Picture.

If we had our way, The Favourite’s lesbian sex comedy would be the final title announced on Oscar night, though for a safer bet, stick with Roma.

Should Win: The Favourite.

Will Win: Roma if not beaten by Green Book in an upset

Turn up the volume!